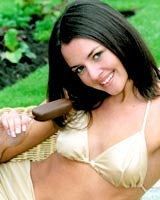 Birds Eye Wall’s has taken its &£30m global account for Magnum ice cream away from Lowe Lintas and handed the business to McCann-Erickson.

The news comes as a blow to Lowe Lintas, after the agency picked up the Magnum business in a major review of Unilever’s food accounts earlier this year.

As part of the review, Lowe won the global dressings account, including the Hellmann’s mayonnaise brief.

Birds Eye spent more than &£5m advertising Magnum in the UK last year. Media, handled by Initiative, is understood to be unaffected by the decision.

A Birds Eye spokeswoman says: “Within the context of Unilever’s brand focus strategy there has been a realignment of creative agency responsibilities involving, among others, the transfer of the Magnum brand from Lowe Lintas to McCann-Erickson.

“Lowe Lintas has recently won other Unilever business in this reorganisation. This is a strategic, business-led decision, which in no way reflects badly on the excellent work the agency has produced.”

Birds Eye recently announced that Liverpool teenager Katie Bain will be its new Magnum Girl (MW March 15). The 17-year-old will feature in ads for the brand after beating thousands of other women in a nationwide contest.

McVitie’s Hob Nobs launches its first online advertising campaign this week. It will appear on Virgin.net, which used to be known as an all-purpose portal but now describes itself as “the UK’s leading entertainment and leisure service online”. The Hob Nobs campaign, which will run for two weeks, supports the biscuit brand’s “You’ve been nobbled” […]

Sean Brierley makes an astute observation (MW May 3) when he connects the retreat of the State with the increasing power and influence of corporations and their brands, and the accompanying rise in the scrutiny to which they’re subjected. But he’s wrong to conclude that “ethics should be kept away from brands” and that “if […]

Can estate agents move away from their tarnished image as financially-tied property brokers and become the house-buyer’s friend?