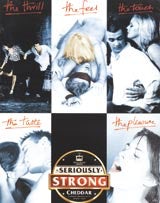 McClelland’s, the 154-year-old Scottish cheesemaker recently bought by French dairy company Lactalis, is on the verge of appointing a marketing director.

Lactalis appointed Andrew Smith as managing director of Glasgow-based AM McClelland last December after buying the company for an estimated &£170m.

Now the company is set to appoint a marketing director to work with the brands, including the flagship Seriously Strong Cheddar range. Former joint managing directors Alastair and Douglas Irvine and their father, chairman Hugh Irvine, all left the company following acquisition.

The Seriously Strong range was launched in 1996 and awareness was boosted by a controversial print campaign that carried the slogan “Safe sex, dangerous cheese” and depicted near-naked couples frolicking with cheese. Hello! magazine refused to carry three of the campaign executions.

In the past two years McClelland’s has run a television campaign in Scotland and the north of England featuring a cheese-stealing Bond-type villain called Mousehead with the strapline “Do it for the taste”.

Directory service 192.com is set to appoint HOW to handle its £1m advertising account as it prepares for a relaunch. The relaunch is an attempt to lure users from its rivals, which include Yell.com, as well as directory enquiries services such as 118 118 and 118 247. HOW will handle all supporting advertising and direct […]

The BBC saw the number of visitors to its BBC Radio websites rise by 70 per cent in January 2005, to just under 7 million people.