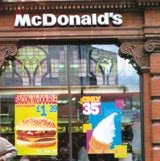 McDonald’s has decided against issuing an apology to customers over the Sudan 1 contamination scare after it decided that the public was “reassured and satisfied by the swift action” that the fast-food chain took to withdraw a salad dressing that contained the carcinogenic dye.

McDonald’s told Marketing Week last month that it was considering apologising about the crisis after it was forced to withdraw a low-fat Caesar salad dressing because it contained Sudan 1. It had been selling the affected product from January 17.

The company believes that its customers understand it was an issue that affected the whole food industry rather than just McDonald’s and has decided to take no further action on the matter. A spokeswoman said at the time that it was affected in such a small way compared with other companies that it did not expect there to be a trust issue with its customers.

McDonald’s is the only company known to have considered apologising to its customers despite about 618 products being affected across around 55 brands. The affects of the scare were also felt by brands that did not have contaminated products such as HP Foods-owned Lea &amp; Perrins.

It was feared sales of its own Lea &amp; Perrins brand might be affected, rather than just the Premier Food-owned brand Crosse &amp; Blackwell, because consumers would assume all Worcestershire sauces contained the ingredient. It was forced to launch a campaign to reassure consumers that the brand was safe to eat (MW February 24).