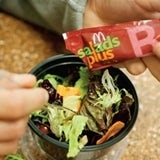 McDonald’s is understood to be talking to below-the-line roster agencies The Marketing Store and Publicis Dialog about a pan-European direct marketing brief.

It is not clear what the project entails but it is thought that the pitch is being run by French marketer Pierre Woreczec, who is based in Paris. Publicis Dialog is the incumbent on the company’s direct marketing business in France, while The Marketing Store handles the account in the UK.

McDonald’s called a similar roster pitch between advertising networks Leo Burnett, TBWA Worldwide and DDB Worldwide earlier this year as part of a campaign to promote the quality of the fast-food chain’s offering (MW March 2). TBWA/London subsequently picked up the brief and created a press campaign, which broke last weekend.

Morgan was due to return to work at the beginning of last month following maternity leave but it is understood that she is discussing a severance package with the company.

The departure of Peter Beresford as UK chief executive earlier this year is also thought to have had an impact on her departure.