McDonald’s is launching its biggest Christmas ad campaign yet as it looks to build on the success of its 2016 activity and put its brand “at an advantage” over the festive season.

The #reindeerready campaign, created by its creative agency Leo Burnett, will launch on Friday (17 November) on Channel 4 before the start of Gogglebox. From today (15 November), the brand will be airing teaser clips to build anticipation.

The TV spot tells the story of a young girl on a shopping trip with her father who is saving a McDonald’s carrot stick to give to Santa’s reindeer. When they return home, however, her brother points out that one carrot won’t be enough to feed Santa’s herd and so they venture back to McDonald’s to collect a bag of carrots.

The campaign will run across TV, cinema, social and digital, while McDonald’s has tied up with Snapchat to create a “hub” that consumers can access by scanning a Snapcode on McDonald’s packaging. The hub will include various games, filters and lenses that consumers can use and share on social media.

McDonald’s is also looking to engage consumers by giving away themed baubles and knitwear to winners of competitions it will run on social. Running alongside the marketing activity will be a festive menu that includes a spiced cookie latte and Terry’s chocolate orange McFlurry.

The fast food chain says last year’s campaign was “incredibly successful”, leading to an increase in sales and brand awareness, and delivering one of the strongest ROI for its marketing.

“[Last year’s] campaign was a real success for us, and gave us the faith to go bigger and even stronger,” Emily Somers, VP of marketing and food development at McDonald’s UK, tells Marketing Week.

“The collective component of having the food and brand campaign worked really well. Specific engagement levels within each channel, and certainly TV, was very high. All metrics ticked the box.”

Despite the success, Somers says the brand evaluated last year’s campaign to work out what else it could have done to make it more effective. What the brand found was that while the tale of Juliette the doll did work as a vehicle to tell the McDonald’s brand story, this year it wanted to tap into a “universal truth” – the fact that it sells carrot sticks.

Christmas is more important than any brand or product, so you can’t put your brand too central.

“We’ve been selling carrot sticks for more than 10 years in our restaurants. It’s something we’ve always done. And it’s absolutely on point with the [wider] message around Christmas,” she says.

That said, Somers admits the brand did have to overcome the challenge of not overplaying its role. McDonald’s wants the campaign to fit around consumers’ lives authentically so that it cuts through “the noise and clutter” of other Christmas campaigns.

“Christmas is more important than any brand or product, so you can’t put your brand too central. This campaign felt more appropriate as the central vehicle [of the carrot] is absolutely true to us, it’s totally relatable and a universal truth. So it doesn’t look like we’re monopolising an event,” she adds.

This year, there has been lots of talk around reduced consumer confidence, inflation and rising product prices. While McDonald’s says it would “never be arrogant enough to say it isn’t impacted by customer behaviour”, it believes its campaign and Christmas menu will carry the brand through.

She concludes: “The great thing is that more people are watching with their heads up than down. I’ve never heard more people talk about Christmas advertising, it’s almost like going back 50 years when advertising was a proper talking point. You either play with it and put your brand at an advantage, as the good ones will get more talked about, [or you don’t].” 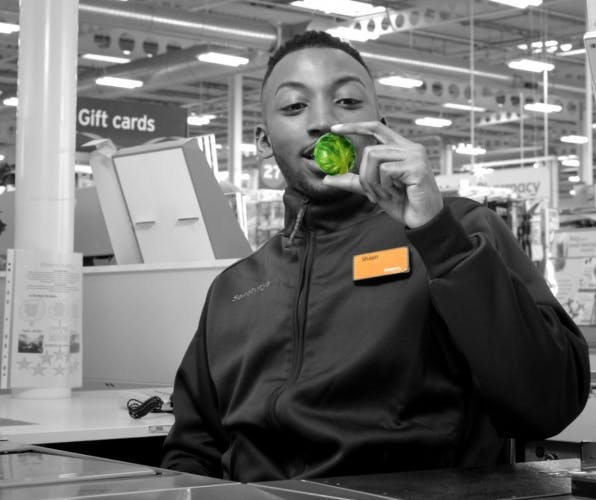 The supermarket says it made a “definite conscious” decision to move away from one-off Christmas ads in favour of a more consistent brand approach.