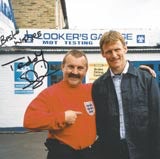 The move is understood to be the first time the fast-food chain has withdrawn an ad and coincides with complaints to the Independent Television Commission (ITC).

The ad, part of the company’s FIFA World Cup campaign created by Leo Burnett, first aired on May 15, but was dropped two days later. A McDonald’s spokeswoman confirms the decision.

The ITC has received six complaints about the ad, all directly referring to last week’s attack. The victim, five-year-old Leah Preston, is still undergoing surgery at Birmingham’s Children’s Hospital.

In the pulled ad, a woman who draws an “Italy” card in the promotion – meaning she needs Italy to win the World Cup in order to stand a chance of winning a holiday – sets her bull terrier on England star Rio Ferdinand in the park, to improve Italy’s chances.

The McDonald’s spokeswoman denies the ad would have been in bad taste even without the dog attack. She says: “It was very tongue in cheek, very slapstick humour.”

Another ad, featuring a mechanic sabotaging the brakes on Teddy Sheringham’s car, will continue to run.