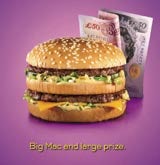 McDonald’s is talking to roster networks Leo Burnett and TBWA Worldwide about an advertising brief to promote the quality of the fast food chain’s food offering. It is not clear when the campaign is due to break.

At the same time, it is also thought to be talking to all its roster networks, including DDB Worldwide, about the next step of the I’m Lovin’ It campaign. However, the move does not directly affect the mainsteam UK advertising account, which is handled by Leo Burnett.

It is thought that the campaigns would be aimed at the European market, particularly the UK and Germany, where the chain is still suffering from declining sales. According to its sales figures for last month, European like-for-like sales are down by 0.5%.

It is not the first time that McDonald’s has awarded project work to a roster agency for the UK market. Last year, it handed an &£8m campaign to promote its salad offering to DDB London. The network is used by McDonald’s Europe and the I’m Lovin’ It strapline was developed by network agency Heye &amp; Partners.

McDonald’s has faced much criticism in the UK has concerns over obesity have grown in recent years. It has revamped its menu several times to include healthier products such as salads and breakfast items, but a number of these have already been scrapped after failing to make an impact with consumers.

This week it has announced that it is closing 25 outlets in the UK following increased competition on the high street from sandwichand coffee shops.