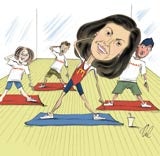 Mary Dillon’s appointment as chief marketer at McDonald’s comes at a time when the fast-food chain is desperate to prove its health credentials. The fitness fanatic has a wealth of experience with health and fitness brands, but can she change the company’s image? asks Caroline Parry

Fitness enthusiast Mary Dillon has just been handed one of the toughest marketing jobs in the world.

Slim and wholesome-looking, the 44-year-old mother of four appears to fit the bill perfectly for McDonald’s, as it attempts to shed its reputation for promoting obesity-inducing food full of saturated fats and calories. Indeed, McDonald’s could hardly have picked a chief marketer with a healthier image. Dillon once headed the marketing at a vegetarian food company, is a keen runner and, as president at Pepsi-owned Quaker, has promoted its eponymous oats brand (which American equivalent of Lucozade) and the Propel mineral water brand, which is marketed on a fitness platform.

The big question for McDonald’s is how Dillon will use this experience to revamp the image of the chain, which has been hit by criticism (and potential lawsuits) over allegedly enticing children and young people to consume excessive amounts of fattening foods.

As she prepares to take the marketing reins at McDonald’s head office at Oak Brook, Illinois on October 3, some expect Dillon will shift the focus away from Light’s much-celebrated “I’m Lovin’ It” global advertising campaign. However, the most pressing task is on the product side – to strike the right balance between launching healthier food products in markets around the world while sustaining interest in the burgers and fries that have made the chain famous.

One advertising industry insider says: “McDonald’s strategy in the UK has been quite schizophrenic over the past few years. What it does well is offer consistent food at a good price, but product launches such as SaladsPlus have been expensive failures. It might as well not have bothered.”

There is no doubt that the key part of Light’s legacy is the I’m Lovin’ It campaign, which aimed to bring in a consistent global brand position that could appeal to an increasingly fragmented group of consumers.

The campaign formed the central part of Light’s strategy when he joined the company in late 2002 and was given the task of making the McDonald’s brand modern and relevant after the company announced its first quarterly loss in 22 years in January 2003. This acted as a wake-up call, and Light’s I’m Lovin’ It campaign was the response.

The campaign, Light claimed, aimed to transform McDonald’s from a children’s brand to one for young adults. His reasoning for this was that all children want to be older and all adults want to be younger.

Under the global positioning, Light has also developed an integrated campaign using music, sport, fashion and entertainment. The campaign launched with Justin Timberlake as a global ambassador and then moved on to Destiny’s Child. McDonald’s also developed its long-standing association with the Olympics and community football.

Light may be stepping down from the top marketing job, but he is staying on as a marketing consultant. Because of this, some advertising industry observers find it hard to believe the I’m Lovin’ It campaign will be axed.

The campaign has been widely acknowledged as a success, along with operational changes such as refurbishing outlets and some of the new menu items. The chain’s results for the first six months of this year show a 2.8 per cent increase in global comparable sales for the period. Sales hit nearly $10bn (&£5.4bn) in the half-year, after increasing to nearly $20bn (&£10.8bn) for the whole of 2004.

The US is performing particularly well, showing two and a half years of growth and a 4.9 per cent increase in comparable sales for July this year. The chain also reported a 5.3 per cent increase in comparable sales in Europe for July. This has been attributed to the success of its Ein Mal Eins value menu in Germany and the introduction of the Les P’tits Plaisirs chicken sandwiches in France. But on the whole, the chain still acknowledges that key European markets pose a problem in terms of consistently improving results.

Mac back on track?

At the time of the results, McDonald’s chief executive officer Jim Skinner said: “I am encouraged by these results. However, we know that in some markets we still have challenges to achieving a consistently positive performance.” There are no separate figures for the UK market.

But if McDonald’s is going to succeed in returning to consistent growth in Europe, then the product range is going to be key to its success, and this is where Dillon is expected to make the most impact. The ad agency insider says: “I think that her agenda will be developing the product and selling it, not some advertising jingle. She will keep pushing the healthy products and keep diversifying it to offer something for everyone.”

McDonald’s has added 21 items to its menu over the past year, including the SaladsPlus range, a selection of breakfast items and Quorn Premier in a drive to extend consumer choice and add healthy options.

The new additions received substantial marketing support, but last month the chain axed a number of products, including some of the healthier options. A McDonald’s spokeswoman says that it was necessary to remove less popular items to make room for the new Toasted Deli sandwiches range and to ease operational stress within its kitchens. But it is clear that despite supposed consumer demand for healthier options, products such as the Quorn Premier failed to hit the spot with consumers.

It is because of this uncertainty, industry observers say, that Dillon has been chosen for the role. She joined Quaker Foods in 1984 and has spent the majority of her career at the company overseeing the development of products such as Gatorade and Propel. She left the company to join Gardenburger, an entrepreneurial vegetarian food company, in 1996, before returning to Quaker as vice-president of product offering and later as vice-president of marketing.

Corporate Edge head of corporate branding Richard Buchanan says that it is clear that Dillon embodies the kind of lifestyle with which McDonald’s is keen to be associated. “McDonald’s has managed to create a consistent marketing platform, but it hasn’t got the healthy eating thing right. The consumers aren’t convinced,” he says.

Even so, Giles Lury, a director at consultancy The Value Engineers, says the chain has to be careful not to push the limits of the brand too far as, ultimately, McDonald’s is loved for its burgers and fries.

He warns: “A brand needs to respect where its limits are as consumers will come with you so far but then they will stop. Then it is time to take stock and work out where the limits are before it becomes fuzzy.”

Dillon certainly looks and acts the part of health enthusiast, but she will need to give McDonald’s a thorough work-out to prevent consumers from deciding that they are no longer “lovin’ it”.

The FA Premier League has appointed Richard Masters as director of sales and marketing. Masters was previously commercial director of the Football League.

Audi has appointed Volkswagen Commercial Vehicles marketer Nigel Brotherton as head of UK marketing. Brotherton replaces Gary Savage, who becomes head of operations. Both will report to new UK director Jeremy Hicks. It was reported that former Skoda marketing chief Chris Hawken, who has been at Volkswagen in Singapore for the past three years, was […]

Microsoft, the computer software giant, is ploughing more than Â£5m in the UK into a brand-building campaign for the autumn, which will continue its themes of “Realising Potential” and “Start Something”.