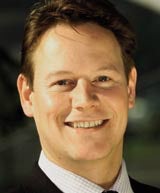 Fast-food giant McDonald’s is seeking a chief marketing officer for a newly created role covering the UK and Northern Europe. The role will be at senior vice-president level.

It is understood that a number of key senior marketers have been approached, including Iceland marketing director Nick Canning, who is thought to be the frontrunner for the job.

The individual marketing teams from all of the countries in the territory will report to the appointed person, including UK vice-president of marketing Laurie Morgan. The successful candidate will also be responsible for all marketing services and advertising campaigns. The appointment will not lead to a reduction in staff at any of the country teams.

McDonald’s is in talks with its roster networks Leo Burnett and TBWA Worldwide about an ad brief to promote the quality of the chain’s food (MW March 2). It is also believed to be speaking to the networks and DDB Worldwide about the next phase of its “I’m Lovin’ It” global campaign.

This is a crucial time for McDonald’s in the UK. Last month it announced it was closing 25 stores in the UK as like-for-like sales in Europe declined by 0.5%.

McDonald’s has confirmed it is recruiting a new marketer and says it has approached “a number of strong candidates” but declines to comment on the individuals involved.