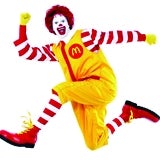 McDonald’s has been criticised by pressure group Corporate Accountability International, which has accused it of “refusing to address the dangerous toll that fast food and predatory marketing is taking on kids” and contributing to the rise of obesity and health conditions such as diabetes and heart disease.

The group wrote an open letter signed by 550 health professionals and also engineered a proposal at this week’s annual shareholder meeting to persuade McDonald’s to assess its “health footprint” and the damage caused by marketing to children.

The resolution only found 6% approval from shareholders.

Skinner said that the company uses Ronald McDonald in a lot of charitable work and argued that it offered plenty of healthy choices on its menus.