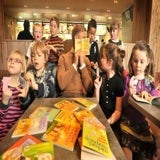 Popular titles such as “Mossop’s Last Chance” and “Martians at Mudpuddle Farm” by former children’s laureate Michael Morpurgo, will be offered with every Happy Meal purchase. Books can also be bought in-store for 99p without buying food.

Each book comes with a finger puppet which, according to the restaurant chain, will “help parents bring the stories to life for their children”.

Nick Hindle, vice president of communications at McDonald’s, says the partnership is aimed at improving the customer experience for mums and dads.

The book giveaway will be promoted with a television advertisement featuring 3D characters from Morpurgo’s books. It will backed by in-store activity.

PR activity will be fronted by television presenter Jeff Brazier, creator of Living TV’s “SuperDaddy” and farther of two.

The initiative is supported by the National Literacy Trust. Recent research by the body found that almost four million British children – one in three – do not own a book.

Jonathan Douglas, director of the National Literacy Trust, backed the partnership, adding “its [McDonald’s] size and scale will be a huge leap towards encouraging more families to read together.”

The partnership, however, has been slammed by anti-obesity body the Children’s Food Campaign. Campaigns director Charlie Powell says: “It is an inappropriate marketing strategy at a time when there is an epidemic of childhood obesity.”

Hindle, however, says that the restaurant chain abides by the UK’s “stringent” regulations. He adds that parents believe that it produces “responsible” marketing initiatives.