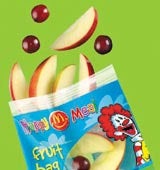 McDonald’s is planning to launch its new adult Happy Meal in the UK later this year. The meal kit includes a salad, a drink and a pedometer, a device to help people burn off food by counting the number of steps taken when walking.

Adult Happy Meals were launched in the US last week as part of an anti-obesity strategy to promote healthier food options and physical exercise. It is understood that adult Happy Meals will form a significant part of McDonald’s sponsorship of a number of this year’s sporting events, such as Euro 2004 and the Olympics.

A spokeswoman said McDonald’s was looking at launching adult Happy Meals in the UK and that they were likely to contain similar items to those in the US.

She says the product is a natural extension of the company’s move towards healthier food, such as the recently launched Salads Plus range in the UK, but that timing of a launch had yet to confirmed.

News of the launch comes as it emerged that chief medical officer Sir Liam Donaldson is preparing to call for people to increase the amount of exercise they take every week. It is understood he will recommend people take 30 minutes of exercise five times a week and will launch the programme under the slogan “Five a week”.

British tobacco companies have stepped up the legal backlash against the tobacco regulations with a legal challenge to the restrictions in the Republic of Ireland. The case is understood to potentially have ramifications on the restrictions on tobacco and point-of-purchase advertising in the UK if Gallaher were to prove the Irish law “disproportionate” under European […]

The UK Public Health Association has warned the number of gambling addicts could soar if gambling laws are relaxed in the UK.

Interbrew UK, the manufacturer of Stella Artois, has slammed the Government’s proposals to set up an independent fund to finance community projects designed to tackle alcohol-related harm. The Government proposal, outlined in the National Alcohol Harm Reduction Strategy by the Home Office last month, calls for the industry to finance the fund which would look […]