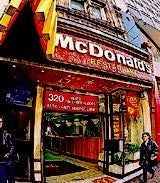 McDonald’s has come under fire from the Independent Television Commission (ITC) which labelled a teaser ad for a “buy one get one free” promotion as misleading.

The ad was followed by a series of commercials for a one-week promotion at McDonald’s, which attracted complaints from 40 viewers. The ads were created by Leo Burnett.

The first commercial in the campaign showed a man ordering an unspecified burger and being handed two. He was told: “It’s buy one get one free”. The accompanying voice-over added a start date for the week-long promotion and on-screen text told viewers to “see in store for details”.

Subsequent commercials which ran on each day of the week showed and named the specific product, such as a Big Mac, as well as the day the promotion applied.

The complaints claimed the ads were misleading because they gave the impression that the offer applied to the entire McDonald’s range.

The ITC judged that the initial ad had been misleading because it failed to indicate that the offer applied to specific products on specific days and not, as it appeared, to all products on the menu. It directed that the ad should not be shown again. But the ITC did not uphold complaints against the other ads because they had made clear the nature of the various product offers.