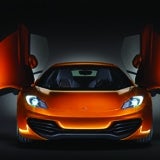 Levine was previously head of Audi South Africa and before that, head of UK operations. He has also worked at Fiat and Nissan.

McLaren launched its road car division in March 2010 as part of a strategy to capitalise on the affinity with its Formula 1 racing brand.

Levine is tasked with overseeing “commercially impactful marketing” for the new sports car business and developing retailer and customer programmes.

McLaren is building a global retail network with 35 partners ahead of the launch of the carbon chassis-based McLaren MP4-12C in the spring.