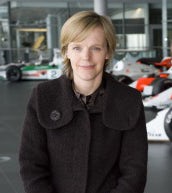 McLaren Automotive has appointed Lianne Daley as head of marketing as the car company prepares the launch of its sports car range in 2011.

The appointment comes a week after the company revealed it is to become independent of current owner the McLaren Group later this year. Former McLaren Formula 1 chief executive Ron Dennis will be executive chairman.

Daley (pictured) will be responsible for product marketing and planning and will answer to McLaren Automotive’s sales and marketing director Rob Lindley.

She will work on the positioning of the new “supercar project”, which will target high net worth individuals.

Dennis relinquished all his Formula One roles last week and was subsequently named executive chairman of the sports car business.

Martin Whitmarsh will replace Dennis in his CEO role and will answer to the McLaren Group board on all F1 matters.

The restructure comes as McLaren F1 is embroiled in a scandal after F1’s governing body the FIA brought charges against McLaren of misleading race officials at the Australian Grand Prix last month.

Apple sold 3.79m iPhones in the second quarter helping to boost its profits over the period to a record $1.21bn (£832m). The three months to 28 March saw Apple strengthen its position in the high-end phone sector, selling 123% more phones as in the same quarter last year. The growth was driven by the launch […]

PepsiCo has posted a slight fall of 1% in profit and sales respectively for the first quarter of the year, while beverage volumes grew by 7% in Europe.