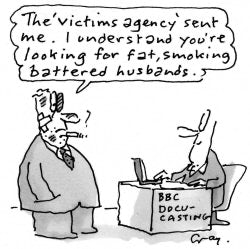 Though I have been involved in journalism since Adam was a fine gangling lad, there is one of its mysteries that I have never been able to divine: where do television and newspapers find people whose circumstances exemplify whatever odd item struts its brief and fitful stuff on the public stage? I mean, within hours of a government department or pressure group announcing that there are people whose lives are being blighted by some misfortune – irremediable fallen arches maybe, or neighbours who tip the contents of chamber pots from the topmost window – the screens and pages are filled with just such victims, suffering souls who tell all of their lamentable circumstances, usually in the same wearied monotone.

Where do these people come from? And how is it that they are so readily available? It is possible, of course, that such instant access to suffering is the result of careful planning, that just as newspapers have shelves full of obituaries, each waiting for its turn to be dusted off when its subject shuffles off, the media also keeps a bank of assorted victims and valetudinarians, ever on standby, waiting for that moment when the call comes and the limelight beckons.

My own theory is that they are not real people at all, but cyborgs. They are constructed in a variety of shapes, sizes and decrepitude and each is fitted with a small slot into which a microchip may be inserted, ready programmed with the ailment, condition, or peculiar circumstance that the occasion demands.

How else, for example, could the Daily Mail instantly lay its hands on half a dozen women willing not only to recount how they had liposuction during their lunchtime but also eager to strip off for cameras and peep coyly over their shoulders as the lens focuses on their bare buttocks? If they are not robots, they are raving exhibitionists who ought to be locked up, so it is both kinder and more reassuring to assume their artificiality is real.

This theory is confirmed by the number of people, or cyborgs, who pop up in the media every time a story about food labelling is concocted. I know anecdotal evidence is unreliable, but when it is accumulated over a number of years it acquires a credibility, and in all the hours I have spent in supermarkets, absent-mindedly observing other shoppers, who, like me, are afflicted by the terrible sense of boredom and disorientation that those places induce, I have never once seen anyone reading a food label. Yet whenever that absurd organisation, the Food Standards Agency, or some other representative of the bossy tendency, complains of inadequate or misleading food labelling, the TV screens pulse with images of shoppers confessing to varying degrees of bafflement.

It is caused by their inability, try as they may, to get at truths malevolently hidden by the authors of food packaging. I am convinced these victims do not really exist. I am also of the opinion that the people who write the food labels share that view. Which is why they feel free to indulge in all manner of whimsy and playfulness. Who can blame them? Whoever they are, they are almost as much of a mystery as the human constructs who claim to read their work.

Are they perhaps chosen at random from among the production-line workers, given pencil and paper and instructed to release their imaginations? Or are they freelance label writers to whom the work is outsourced? Are they men and women who live blameless lives tending their roses until the package arrives from Fray Bentos with instructions to pen something about steak and kidney pie? Wearily, they lick the pencil and wait for the muse to creep up and slap them on the head. When it fails to deliver and the deadline looms, there is nothing for it but to bash something out and bung it off to the client.

How else could one explain this, on a bottle of Greene King Strong Suffolk Vintage Ale, “This Vintage Ale is dark and intense, almost ruby in colour with an appetising spicy fruitcake aroma. This full-bodied ale combines flavours of oak, caramel and burnt toffee that will march across the palate.”

March? In which direction? From side to side and upside down, across the roof of the mouth until they collide with the teeth, and, like a platoon in Dad’s Army, bump into each other, those behind, the burnt-toffee laggards, falling over those in front – the caramel zealots, who have stopped? Or do they march straight ahead and topple to the intestines? Do not, whatever you do, read food labelling. That way madness lies.