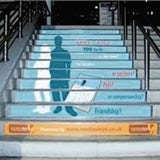 Media Steps, the provider of advertising on railway station stairways, is in talks to secure further funding after admitting it was running out of cash.

Media Steps says it is in talks with possible finance providers and that all options are being considered for its future. The financial position of the company has already led it to implement a cost-cutting programme. Although there have been no redundancies, the directors have deferred some of their salaries for three months.

The company has sites at 140 train stations around the south-east of England as well as in two sports stadiums. The roll-out of the network has stalled in recent months. In December last year, the company said it planned to have over 500 sites installed before the end of March.

It has struggled to attract long-term deals from major advertisers, and said in a stock market statement this week that “trading continues at a level well below that necessary for break-even in profitability or cash flow”. “We’re not in danger yet,” says finance director Ian Russell, “We don’t expect to be in trouble for a few months.”

Its recent campaigns have included ones for Airmiles and Sainsbury’s. The most recent advertiser to sign up is publisher Hodder &amp; Stoughton, which is using four sites around London from next week to launch the paperback version of Brand New Friend by novelist Mike Gayle.