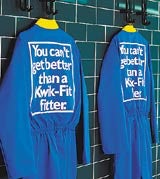 The Edinburgh-based company is Europe’s largest vehicle repair chain, with about 2,500 shops that also sell automotive parts and tyres, and offer speedy inspections.

The company wants to expand to 5,000 centres over the next two years. This is understood to include expansion into Asia and Eastern Europe.

Kwik-Fit has a number of brands in its portfolio including Speedy, Pitstop, Stop ‘n’ Steer and Silver Shield across ten countries including the UK, Poland, Spain and Germany. It also has a number of unbranded local shops operating under its Tyre Plus Autoservice division.

The chain was bought by Ford in 1999 for about $1.6bn (&£1bn), but venture capitalists CVC Partners bought 81 per cent of it last August. The retailer has used the strapline: “You can’t get better than a Kwik Fit fitter” since 1985 in all its advertising campaigns.