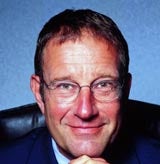 Express Newspapers joint group managing director Stan Myerson says: “We know MediaCom because it handles media for the Daily Star, Sunday Star and our celebrity magazines in the UK.

“This is an extension of our relationship with MediaCom and the WPP Group. MediaCom in New York bought $10m (&£5.6m) worth of media space to be utilised over three months.”

The launch has been touted as the biggest in US publishing history. Desmond appointed Trevor Beattie’s new agency Beattie McGuinness Bungay (BMB) to handle a &£7m ad campaign for the US version of OK!, involving television, press and poster advertising.

Beattie’s advertising uses the tagline “Avoid Dull People” in a slight on Time Warner-owned People, the biggest-selling celebrity magazine in the US.

The first two issues of the US version of the celebrity and gossip magazine are believed to have sold about a tenth of the 1.3 million print run – 130,000 copies – despite the publication selling advertising on the basis of a 350,000 circulation.

An Electoral Commission advertising campaign aimed at encouraging people to vote in the General Election failed to attract voters to the ballot box, according to research.