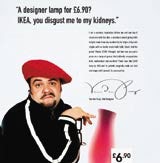 Prior to the pitch, the Swedish furniture retailer used a number of media agencies on a country-by-country basis across the world. It is believed to have invited five of these agencies – Omnicom’s OMD, Publicis Group’s Starcom MediaVest, Aegis’s Vizeum and the two winning agencies, both owned by WPP – to pitch. Only OMD was eventually shortlisted with MediaCom and Mediaedge:CIA.

In the UK, Ikea also works with media strategy agency Naked, which was appointed in May.

It stopped working with the creative agency Karmarama in the UK earlier this year, instead choosing to use Danish agency RBLM. Karmarama had been responsible for the “elite designers against Ikea” campaign.

In recent years Ikea has been forced to adapt its expansion strategy after UK planning protocol limited large out-of-town shopping developments. The Swedish retailer is now developing a concept for city and town centres, one of the first of which will be in Coventry. It also has plans to sell own-label food products.

Walkers Snacks is trying to shore up sales of its core range of crisps with the launch of a multi-million pound iPod Mini giveaway. It is thought that the promotion is designed solely to boost volume sales of the core Walkers range, a key element of Walkers’ strategy for this year, owing to declining sales. […]

Lord Lamont is right about one thing: focus groups are a waste of time and money.