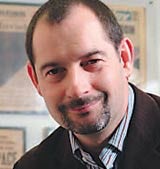 Whitmore’s departure follows a long line of management oustings during the past few years at the media agency, and comes just months after chief executive Fiona McAnena stepped down after a string of account losses. McAnena was replaced by Rob Norman, who moved across from Mediaedge:CIA subsidiary Outrider to become the company’s chairman.

Norman says he “terminated” Whitmore’s contract because he wanted to bring “a new sense of energy” into the business.

Norman adds that he is bringing in James to replace Whitmore as Mediaedge:CIA’s managing director in response to industry criticism: “We are evolving the business, and they [the press] have been saying that we need stronger, more high profile figures at the agency. This is very good news for the agency.”

One insider claimed that Norman ousted Whitmore because the former managing director did not always see eye to eye with him.

James, who is 32, left his post of managing director of Manning Gottlieb OMD at the end of last year to start a consultancy. Before joining Manning Gottlieb, James worked at CIA.

CIA was acquired as part of Tempus by WPP in November 2001. The agency was merged with WPP media agency Mediaedge. Whitmore was managing director at Mediaedge and moved across when the two agencies merged. He is responsible for Mediaedge:CIA’s &£11m Colgate-Palmolive business.