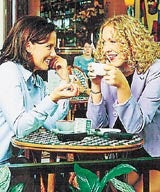 Admiral’s creative account is also managed in house, although it has worked in the past with advertising agency Inferno. The review was handled by the AAR.

Admiral Insurance products include car, travel, pet and household insurance, as well as mortgages through First Independent Direct. It owns several brands, such as Bell Direct Car Insurance, Diamond and elephant.co.uk. The latter, an online car insurer, was launched in September 2000 and achieved sales of £80m in 2002. Last year, elephant.co.uk spent £2m on its television advertising campaign, which featured a person dressed up as an elephant tapdancing.

In October, Barclays Private Equity sold its stake in Admiral Insurance to HBOS and Lloyds TSB for £80m. It had been an investor since late 1999, when it backed a management buy-out of Admiral Insurance from Brockbank Group.