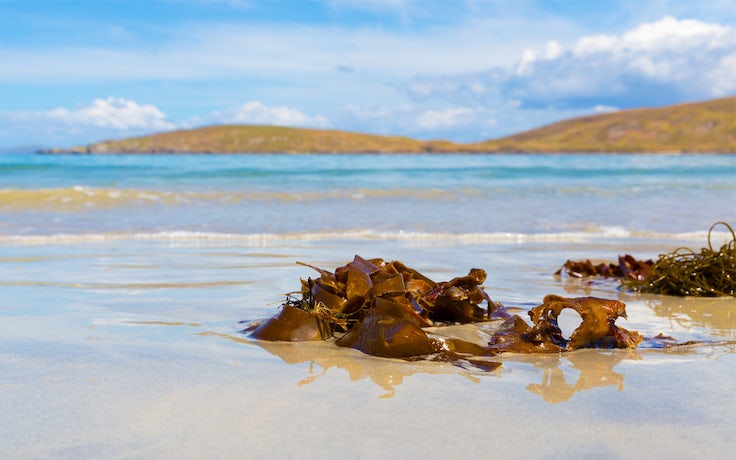 It’s brown, it’s slimy and it could be the answer to the world’s plastic problem. JustEat has been trialling it as an alternative to plastic takeaway boxes and sauce sachets; PepsiCo and Pernod Ricard have been using it to deliver product samples; it is saving sporting events and festivals from using hundreds of thousands of throwaway cups.

Brown seaweed is one of nature’s fastest-growing, most renewable resources. And the people behind London-based sustainable packaging startup Notpla have been using it to create revolutionary material that is compostable, edible and biodegrades naturally in four to six weeks.

Notpla’s mission is to make black plastic packaging disappear. This hasn’t changed since it was founded in 2014. Now, the six-year-old business is thinking about how it can build a brand that is akin to Lycra or Teflon where the name is also the material, and in a way that makes it easier for brands to understand what the product is and why it is different from biodegradable plastic.

“We’ve been on a journey in terms of brand to really try and communicate and represent the mission we have,” says Notpla’s co-founder and CEO Pierre Paslier. “One of the things that was really hard for us to explain before we changed the brand was what the product we were making was, why was it better or different industrially than biodegradable plastic.”

Notpla went by the name of Skipping Rocks Labs before it partnered with Superunion to develop a new brand architecture and brand. Paslier and co-founder Rodrigo Garcia Gonzalez (who met in 2013 while studying innovation design engineering at Imperial College London and the Royal College of Art) liked the name but they felt it lacked the “meaning and future-proofing” it needed to become “the most sustainable packaging company brands can partner with”.

That on-the-go market is where we have the best role to play – with Pret, Costa and Starbucks, there is so much we could be doing.

Paslier says moving to something as simple and bold as Notpla – “it’s just not plastic” – has already made it much easier to have those initial discussions with brands.

“There’s so much jargon in this packaging industry that people easily can confuse you about what it is,” he explains. “From the commercial discussions we’ve had, there is this feeling that people are relieved it’s not some kind of semi-greenwashing thing that is only going to do half of what it says on the can.”

Notpla has has three main product lines: Ooho sachets for liquids, a seaweed liner for coatings and films for solids.

Notpla teamed up with Just Eat earlier this year to launch the world’s first seaweed-lined box for the takeaway sector, an industry that is thought to be responsible for around 500 million plastic boxes each year – most of which end up in landfill. Notpla and Just Eat, in partnership with Unilever’s Hellmans, have also been piloting the use of seaweed-based sauce sachets.

“We are at the beginning of what we can do in that industry,” Paslier says. “As we grow and have more capacity we are definitely going to want to work with all the brands and platforms. That on-the-go market is where we have the best role to play. For example, with Pret, Costa and Starbucks, there is so much we could be doing with all the sandwiches and coffees and snacks that they sell immediately and then people consume it on the go.” 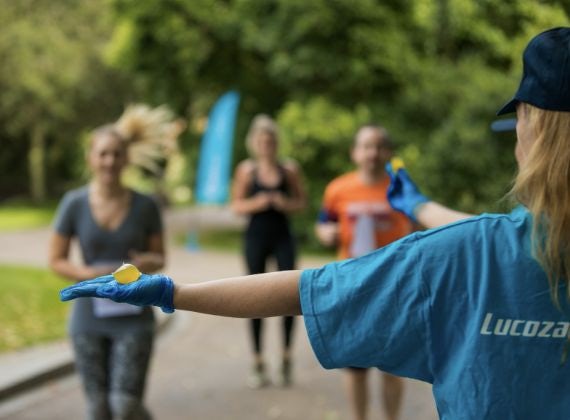 Notpla has sold more than 300,000 Ooho sachets so far, which is 300,000 fewer plastic cups or bottles entering the environment.

By using Notpla’s Ooho sachets at the London Marathon last year, Lucozade was able to make all of its hydration stations plastic-free and reduce carbon emissions by 80% per unit compared with a plastic cup.

But Notpla’s products are giving brands a lot of bang for their buck too.  Scottish whisky brand Glenlivet charged £5 per pod of whisky at London Cocktail Week, while a Lucozade campaign received £1m worth of media for a couple of races.

“We certainly didn’t charge that,” Paslier says. “What these brands who are actively working on sustainability have realised is they can easily work with their marketing budgets to fund a slightly more premium trial period of that new packaging before completely committing to it.”

The material Notpla uses is cheap because seaweed is so abundant. Currently what costs more is Notpla’s machines, which are are still prototypes and need a lot of engineers. This means the production cost is more expensive and premium than plastic.

We’ve actively tried to maintain a balance between the amount of publicity we do and the amount of engagement we can do, it’s going to be a soft continuous growth of the brand.

Notpla believes it will be able to compete with plastic directly within a few years as it improves the efficiency of its machines.

“In the meantime, the actual perceived value is the reason why brands don’t mind too much whatever price we give them because that works out for them quite well,” Paslier says.

Based on the conversations it has had with brands, Notpla says some – particularly beverage companies – are worried that working with a brand that is so vocal about being “not plastic” will highlight how much plastic they really use.

Notpla wants to make it clear that it isn’t against all plastic.

“Plastic has a role to play but only in places where you’re going to use the most of the material, not for things that are going to be used in five minutes, thrown away and end up in the ocean for hundreds of years,” Paslier explains.

“For the medical industry we absolutely need plastic because it’s saving lives, there is no question about this. That’s what we are able to say to brands: if you want to keep on using plastic in a responsible way you do that with whoever, we are here to provide an alternative.”

As a “from-the-ground-up brand” that started with people liking videos on Facebook, Notpla is keen to keep its grassroots edge and it is discerning about the businesses it chooses to work with. Paslier says there are a lot of businesses that Notpla hasn’t actively worked with because it feels it will be more of a risk than anything.

“If a brand is just interested in making a bit of an announcement and not trying to do something long term about it, that’s not a good sign for us,” Paslier explains.

“If the activities of a beverage company, for example, are clearly having lots of negative societal impacts, we don’t want to give them the option of shifting the discussion to something else. Sometimes it’s hard because you think [some brands] could have such a huge impact if they change this and that but at the same time you also have the counter-argument that they haven’t been seen to change for 25 years, making announcements and not doing anything.”

Fighting the war on plastic: The brands trying to break our plastic addiction

Notpla hasn’t done much of its own marketing or communications to-date. With only three machines in its East London site, it is mindful there is only so much it can produce and it does not want to make a big announcement and not be able to deliver more products than its engineers and chemists can physically do.

“We’ve actively tried to maintain a balance between the amount of publicity we do and the amount of engagement we can do, it’s going to be a soft continuous growth of the brand,” Paslier says.

“From the beginning we’ve been really built from viral videos, social media, so we tend to work on a very direct relationship with consumers. We mainly communicate on social media, we try to be as authentic as possible from that aspect. Our partners usually go more full-on when they announce or launch something and it’s worked quite well to work hand-in-hand as a partner with them.” 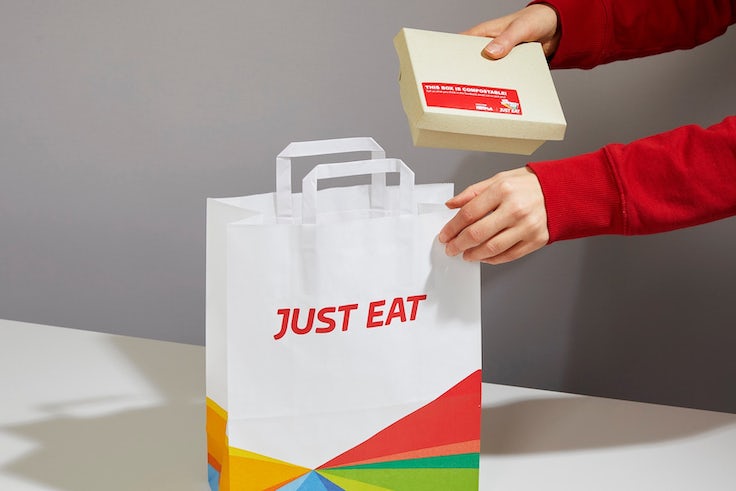 Notpla worked with JustEat’s marketing department to create joint branding for the seaweed-lined boxes, as well as a few videos explaining what the partnership is about.

“That was a nice first interaction with another marketing department of another company and working together to create some joint assets,” Paslier says. “It was exciting to see them working closely to our brand.”

Notpla is now thinking about building its own marketing team within its tight-knit group of 25 who “strongly believe they can change something about this plastic crisis”. These plans have been slightly waylaid as a result of Covid-19 but the intention is to bring somebody on full-time to focus on the marketing. It is also looking to strengthen the commercial team now it has the capacity to produce more.

Paslier says Notpla has been “busier than ever” since the onset of the pandemic and has been having conversations with a number of large US groups.

“People are really realising that we are not going to go back to normal, we have to be more sustainable and the brands are actually really giving that signal from the top level,” he says. “It’s super exciting that this is a big signal that we can’t keep on mistreating the world like we have.”

The pandemic could work in Notpla’s favour in another way too. Recent studies show that the coronavirus can stay alive on plastic for nine days. Notpla has started to reach out to labs to analyse its films because it believes this could be a “big added value” if it emerges that nature is able to withstand the virus better than synthetic materials.

“Where plastic has been seen as the most perfect solution for a very long time, we are actually realising that it’s not,” Paslier says. Notpla has applied for a government grant to test the antiviral properties of its films, which will accelerated the coronavirus-related testing if it is approved.

2020 is going to be the year Notpla “accelerates and replicates” the product hub it has in East London across different cities. The aim is to have lots of local hubs that produce for their local environment because – with the environment always front-of-mind at Notpla – that means it can reduce the transportation even further.

“Is our goal to make the most money?,” Paslier says. “No, because we want to replace as much plastic as we can.”

Unilever’s CEO Alan Jope is calling on activists to pressure the company to be better on climate and social issues after reports criticised the FMCG giant’s plastics progress. 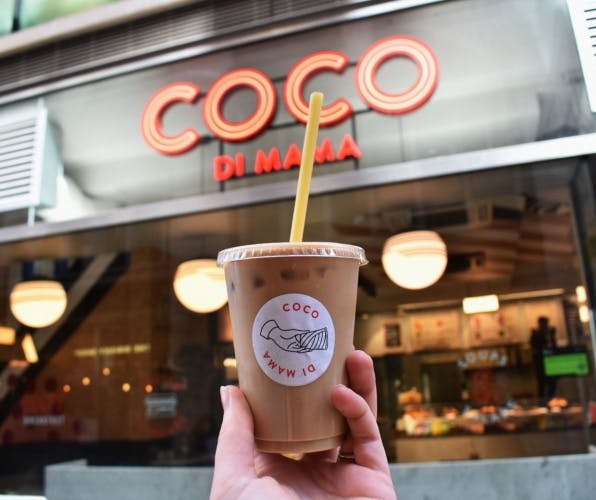