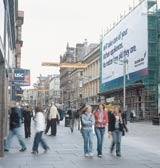 After Land Securities, British Land is the largest property company in the UK, and is one of the biggest landlords in the City.

As well as owning offices, shopping centres and commercial developments throughout the UK, British Land has 15 joint ventures with partners, which include retailers GUS and Tesco. Its properties include Broadgate in the City, Regents Place near Euston and the Meadowhall shopping centre in Sheffield.

British Land appointed Mega Profile after a review of the media potential across its portfolio.

Deals between outdoor media owners and landlords are quite common. One of the country’s largest property owners, Network Rail, contracts out the media management of all its advertising space to several media owners.

Mega Profile is best known for setting up the UK’s largest outdoor site at Fort Dunlop. The company recently lost this site to rival Clear Channel. The media owner is also looking for an advertiser to sponsor a shroud covering part of London’s St Paul’s Cathedral (MW October 9).