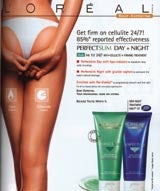 The concept of the megabrand has been common currency in the fast-moving consumer goods world for some time. Global players such as Procter & Gamble and Unilever have been slimming down their product portfolios to focus on a handful of core brands for a number of years. But with the trend sweeping the cosmetics industry, questions are being asked about the effectiveness of the megabrand in one of its thriving new categories: cosmoceuticals.

Cosmoceuticals are cosmetic products that have at least one “bio-active” ingredient and claim to have both a cosmetic and a pharmaceutical benefit. In other words, they offer the emotive promise of something that is going to improve the way we look and feel, backed up by “proven” technology.

“These are products that are offering more than just a short-term paint slap,” says Don Williams, chief executive of branding consultancy PI Global. “They are claiming real, long-term benefits.”

Some cosmoceuticals, such as anti-dandruff shampoos and whitening toothpastes, have proved successful under the umbrella of a megabrand, and the market is expanding rapidly. Consumers’ desire to look good, coupled with an increased life expectancy, is driving demand for medically-endorsed products that combat the signs of ageing.

“It’s all part of a growing desire for healthiness and wellbeing,” says Euromonitor news analyst Alexandra Richmond. “Not only are doctor brands seen as more efficacious, they are also seen as safer and healthier.”

It is a point backed up by the success of brands with the cachet of a medical heritage. One such product, Klein-Becker’s StriVectin SD, was originally marketed as a stretch mark cream. When it emerged that it was equally effective as an anti-wrinkle treatment, Klein-Becker relaunched it as an anti-ageing line and sales promptly jumped from $1.2m (£678, 000) in 2002 to a staggering $58.6m (£33m) in 2004.

However, while the market is growing, analysts point out that typical consumers, being older, are distrustful of megabrands making outlandish claims, instead seeking out what they believe to be genuine “medical” products. Indeed, recent research by Datamonitor found that 75 per cent of consumers were sceptical of cosmoceutical manufacturers’ claims, while 34 per cent simply did not believe them.

Datamonitor also points out that the situation has not been helped by companies such as L’Oréal, which was forced to withdraw ads for its Anti-Wrinkle De-Crease and Perfect Slim lines last year after the Advertising Standards Authority ruled that it could not back up claims of effectiveness.

Some cosmetics manufacturers are adapting, however. Last year, Elizabeth Arden entered a co-marketing agreement with clinical skin care brand Allergan Prevage. It has rebranded the line Prevage MD and sells it separately to its other brands to avoid diluting its medical heritage. Similarly, Beiersdorf has launched a dermatologist-endorsed brand in Europe called12-sku, which is quite distinct from its Nivea megabrand.

According to Datamonitor, the UK’s cosmoceutical market was worth £230m in 1999 and is expected to be worth £351m by 2009 – a 52.9 per cent rise. However, given the scepticism of cosmoceutical consumers, companies may have to look beyond the megabrand to exploit the category.

Some commentators have already suggested that megabrands place too much emphasis on corporate efficiency, defining markets in terms of the products they sell, as opposed to satisfying consumer need. In the case of cosmoceuticals at least, they may be right.