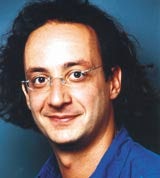 What’s in a name? An oft-asked question, and increasingly, in marketing circles at least, the answer seems to be “a sentence”.

It would seem that to get on in the marketing or business world, it is useful to have a name that can stand alone with a full stop at the end.

On the back of this, the Diary predicts a bright future for Threadneedle Investments communications director Richard Eats; and, if the Diary’s theory is correct, Skandia Life managing director Nick Poyntz-Wright should be set for a future that eclipses even Bill Gates.