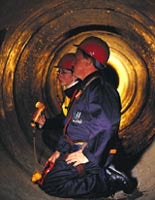 Scottish Water, a new publicly owned water body for Scotland to be formed next spring, is understood to be seeking an advertising agency to develop its brand identity.

A spokeswoman for the Scottish Executive says: “The Scottish Water transition team is looking into a number of projects. The issue of corporate identity is one of them, but at the moment it is very early days for any specific details.”

At present, the three water authorities, which took control of Scottish water five years ago, act as monopolies and consumers in Scotland receive water bills from one of the three authorities.

It is understood that the creation of Scottish Water will allow new entrants into the market which will be able to take over customer accounts, while using the Scottish Water infrastructure. The legislation is expected to even out the large imbalances in water charges across Scotland, particularly for consumers in the north, who have experienced high bills because of major spending on upgrading old facilities.

Events in the US have shaken a world economy already looking weak. At the interface between confidence and the profit and loss account, the advertising industry has a vital role, says John Shannon