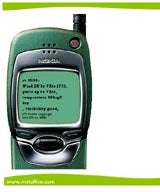 The Met Office has appointed Andrew Phillips as the first marketing chief for its relaunched commercial division.

Phillips will be responsible for overseeing the Met Office’s drive to compete with services offered by foreign weather forecasting companies and former staff such as Bill Giles, who have set up their own consultancies.

He will head a team of ten people and report to managing director Stephen Lawrenson.

The role of marketing director of the commercial division was created following the Met Office’s rebranding as a “global environmental advice centre”, at the end of last year.

At that time, the organisation split the division into corporate and customer business units and appointed its sales and marketing director Gareth John, to the position of director of corporate business.

Before joining the Met Office, Phillips spent seven years running his own marketing consultancy, working with clients such as Coca-Cola, Nestlé and Best Western Hotels.

In recent months the Met Office has moved away from its traditional role as weather forecaster by launching a range of commercial products to help businesses and the public sector plan for future changes to the weather and environment.

“We have access to some of the most cutting-edge technology available in forecasting, so there’s great potential to bring some fantastic products and services to market,” says Phillips.