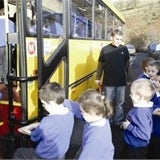 Poulters has been briefed to target brands across the financial services, retail, utilities, transport, food and youth sectors. It will also look to create a number of “brand partnerships with youth-facing brands” to work alongside the main sponsor and to sell the scheme to parents and children. The agency is also “prioritising” health and lifestyle brands.

A number of local UK education authorities already use the yellow buses but the Metro scheme is the largest so far. It has received &£18.7m from the Department for Transport and plans to have 150 buses carrying up to 10,000 school children every day by 2008. It is thought discussions are taking place about extending the scheme to other parts of the country.

The My Bus scheme will be aimed at parents as a way of cutting down on both truancy and road congestion. Children who have been signed up for the scheme will be monitored, and parents will be alerted if their children are not at the designated bus stop when the bus arrives.

Metro claims the scheme will also help to cut traffic, as research shows that the school run accounts for an extra 2 million car journeys during the rush hour every weekday morning.