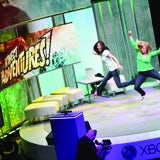 XBox Kinect allows players to use their voice and body as the controls, without buttons or a controller, through an integrated camera, motion sensors and microphone.

Don Mattrick, president of interactive entertainment business at Microsoft, claims: “Years of research and a team of engineers and artists have created something approachable, simple and affordable that everyone can enjoy.”

Kinect will go up against Sony’s PlayStation Move controller and Nintendo’s upgraded Wii Motion Plus this Christmas.

Over 25.2 million games consoles were sold worldwide in the last year, and the market is said to be worth £2.39bn.

Microsoft has spent £300m on marketing Kinect globally, with TV, radio, point of sale activity and a Kinect roadshow in the UK.

Several advertisers have already linked up with Kinect to promote their products through in-game advertising.

In June, Burger King announced that it would be offering a virtual toy within Kinect children’s game Kinectimals.

In the US, Chevrolet will offer a test-drive of its vehicles in racing game “Kinect Joy Ride,” and T-Mobile is offering fixed product placement in the immersive game “Kinect Sports.”

Research by TNS Techonology suggests that the key to the platform’s success will be if consumers can understand how the product works.

TNS found that just 7% of people interviewed would buy it, but this figure rose to 19% following a demonstration.

Stephen Yap, head of TNS Technology, says: “The increasingly complex technology associated with the new console means it is difficult for consumers to understand or visualise what it can actually do.”

“The key to the Kinect’s success will be in its marketing and it is critical that retailers provide demonstrations in-store to drive sales,” he adds.