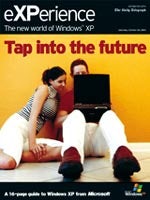 Microsoft is sponsoring three supplements in The Daily Telegraph to promote its Windows XP operating system.

The 16-page tabloid supplements will be carried on three consecutive Saturdays, beginning this week (October 20).

The first supplement features an advertorial about the XP system, which is released on October 25, while the others will look at home entertainment and communications. While Microsoft will not comment on the cost of the deal, it is believed to be a six figure sum.

The deal was negotiated by Microsoft’s media agency, Universal McCann.

A covermount CD-Rom will be included on the second supplement in the South of England and on the third in the North.

The CD-Rom will show a range of XP products and suggest practical applications such as taking pictures from a digital camera, scanning and e-mailing. Some of these demonstrations will be video-based, some will follow a “click-through” format and some will appear as Flash movies.

Microsoft sponsored a one-off supplement in The Times for the release of Office XP in May.

The Daily Telegraph and Sunday Telegraph are also teaming up with UGC Cinemas and Buena Vista International for the second Movie Monthly coupon offer. Vouchers to claim free tickets for preview screenings of the Nicole Kidman thriller The Others will be available from Friday (October 19) until Monday (October 22).