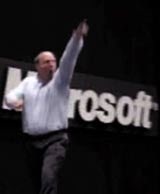 The Diary has learned that Microsoft megalomaniac Bill Gates, not content with controlling the world Blofeld-style, now wants to get into the record books.

To promote the launch of Windows XP tomorrow (October 25), Microsoft is trying to break the record for the fastest-produced music video, using the product’s editing equipment.

The attempt will be made by indie wannabes Electric Soft Parade, whose high point so far has been a gig at a pub in Leicester.

Whether Microsoft’s second-in-command Steve Balmer, who is in the UK for the launch, will be pogoing in the background remains to be seen.

The Diary wishes them luck and hopes that nothing goes wrong with the equipment on the day, because that would be really embarrassing.

The news that the BBC and ITV had won the rights to show the World Cup was no surprise – Kirch had no choice. But how did they get them so cheaply?

The number of golf courses has rocketed in recent years, and Centrica’s launch of Golf England is a vote of confidence in the sport. But there’s plenty to do to make the grass greener on the fairway