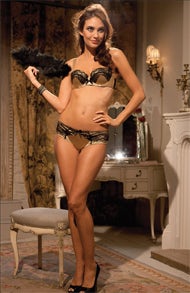 Increasing competition is putting the squeeze on mid-market lingerie brands on the high street. It is no longer enough to add some lace or frills to make underwear stand out from rivals.

In the first week of November, Theo Paphitis, former La Senza owner and star of the BBC’s Dragons’ Den programme, announced that retailer Boux Avenue would make its debut on UK high streets in 2011, and in the same week French brand Etam returned to the UK as an online-only lingerie competitor. In 2012, US brand Victoria’s Secret will also arrive on these shores, having secured a store on New Bond Street in London.

In response to this influx established high-street lingerie brands are attempting to carve out a unique personality to get ahead of the competition. Buying lingerie should be “like going into a sweet shop”, according to La Senza marketing director Sarah Hawkins. Like many specialist retailers, the lingerie brand wants shopping in its stores to be an experience and its products to be treats.

Hawkins has the task of extending La Senza’s appeal beyond the 18- to 30-year-old age range, and establishing a reputation for selling the underwear equivalent of Belgian chocolates rather than pick-and-mix.

“In the past the brand has been regarded as quite young, trendy and sexy, but to make any brand stand up longer you have got to make it have wider appeal,” she says. This is especially true in light of a Retail Intelligence report on the underwear sector by Mintel, which reveals that women aged between 25 and 54 spend more on bras compared with the rest of the population.

Michelle Strutton, Mintel’s head of UK beauty, fashion and household research, says: “La Senza has a problem in that it has lost out price-wise at the younger end to Primark, and has low appeal style-wise to the 30-plus market. It really needs to consider its positioning and decide who it wants to aim at.”

The repositioning of the La Senza brand encompasses every element of marketing, from product lines to shop fronts, interior design to advertising. According to Hawkins, “a huge amount of work has gone into the products” in the past 18 months, while the photography style in marketing materials has now changed to involve more smiling and less pouting. In recent weeks three new stores have also opened, featuring grown-up pastel tones rather than the pink shades of its other outlets.

La Senza is currently assessing its branding from every angle, so the change will be gradual. Only once this reappraisal is complete will the brand’s high-profile locations like Oxford Street in London be assimilated into the new image.

The mid-market position the brand occupies is becoming an ever-tighter fit, however. Focusing on exclusive but affordable lingerie – something Hawkins admits is “a want, not a need” for consumers – pits La Senza against an expanding range of new and resurrected specialist brands.

While La Senza has chosen to go more upmarket, others are also looking at the challenge of making their brand unique. For example, Etam Group co-chairman Laurent Milchior commented this month that its target customer is “a young woman looking for fashionable lingerie with a French twist” (MW 4 November).

Etam has also formed a partnership with model and designer Natalia Vodianova to promote the brand’s product ranges, Milchior adds. “Natalia has been the face of Etam since 2009 and will appear in advertising campaigns as well as creating her own collections for Etam.”

Fashion inspired by popular culture is also driving sales. Christina Acklam, marketing manager at Figleaves.com, gives a recent example where prevailing fashion has directly affected the styles it stocks and, ultimately, its sales. She says: “Mad Men has had a dramatic effect on sales of traditional-inspired lingerie featuring bigger knickers. Our buying reflected this and when the show aired again this September our sales shot up by 15%, and shapewear by 27%.”

She adds, however, that designs must always keep in mind what customers need from lingerie – identified specifically as “style, elegance and comfort”. Brands in the sector should be inspired by trends, but not be fashion slaves, she argues.

Of all the retailers in this section of the market, Ann Summers has established perhaps the most recognisable points of difference, with branding that is overtly sexual and by marketing its lingerie products alongside sex toys, bondage apparel and “lubes and licks”.

Yet according to Mintel’s report, the size of the consumer market for lingerie remains limited, especially when considered in the context of the wider UK underwear sector, which is dominated in terms of retail sales by Marks & Spencer. During 2009, 49% of women said they bought or were given underwear from M&S, against 15% from La Senza and 8% from other high-street lingerie specialists.

The most important prompt for purchasing underwear is replacement of old items, cited by 69% of respondents. This is far ahead of discretionary reasons such as a holiday (20%), a treat (17%) or a special occasion (12%).

Mintel’s research does, however, identify discretionary purchases as an area for potential growth. It notes that in order to take advantage, brands will need to provide styles in tune with fashion trends and “improve product performance”.

Consumers need to think of underwear as being both fun and functional, it concludes.

However, a separate report by YouGov found that only 18% of people are willing to spend more than £20 on an underwear item when buying it for themselves.

Mintel’s Strutton says lingerie retailers still have some way to go to change consumers’ attitudes in the way that is necessary to open up greater opportunities in the market. “I am not sure that lingerie brands have been able to make all consumers think of buying underwear as a fashion purchase, simply because two-thirds buy it just to replace old items,” she comments.

It is the failure to do so up to this point that has caused the mid-market squeeze. A broader appeal will be necessary to loosen the straps and allow these brands to breathe. 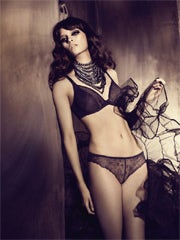 Avoiding the mid-market fray, Rigby & Peller positions itself as a luxury brand with its emphasis on a bespoke fitting service and highly engineered products.

The retailer also holds the Royal Warrant. This undoubtedly confers prestige on the Rigby & Peller brand, though marketing director Liz Hawkes insists: “I do not think people see themselves as wearing the same bra as the Queen.”

While the brand does not operate in the ground occupied by most high-street lingerie retailers, Hawkes admits it would be “churlish” to claim it does not compete with them at all. Rigby & Peller still has to win over those consumers who are seeking premium lingerie and swimwear, but who Hawkes says “feel a bit intimidated coming to our stores”.

Her task, therefore, is to make the experience of going to Rigby & Peller more accessible while also preserving the premise on which the brand is built. “Our service, and our whole unique selling point, is all about having the perfect fit,” says Hawkes.

To reinforce the point, the brand conducted research among first-time customers at the end of last year, which found that 80% of them were previously wearing the wrong size bra.

Once the psychological barriers have been overcome, Hawkes says that customers can become “fiercely loyal”. She notes that many make their first visit to buy bridal lingerie, and subsequently realise the store can fill everyday requirements. Men buying presents for partners also make for loyal customers, she adds. Accordingly, the Rigby & Peller website has an area dedicated to advice for men.

While more upmarket brands appear to have fared better during the recession than others, they have not been immune from its effects. Michelle Strutton, head of UK beauty, fashion and household research at Mintel, says: “Rigby & Peller recently announced a loss for its last year’s trading following a profit the previous year. We saw underwear sales impacted by the recession in 2009, with the exception of the higher-priced retailers. It seems the effect was felt later among these more affluent shoppers.”