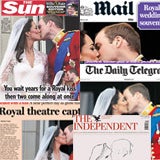 The national midmarket sector was up 2.84% month on month, while the Sunday midmarket saw circulations rise 4.51% in April, according to the latest Audit Bureau of Circulation (ABC) figures.

Both titles were reported to have discussed a potential merger at the start of the month.

Despite heavy royal wedding coverage, the two long bank holiday weekends in the period disrupted consumer buying patterns, with both the popular and the quality press reporting flat circulations for April.

The Daily Mirror was the only tabloid title to report a circulation increase in April. The newspaper was up 1.46% month on month to 1,172,785 and down 5.76% year on year.

The Daily Telegraph marked the biggest monthly circulation increase in the quality market but it also has one of the largest yearly declines. The paper was up 2.10% to 639,578 but is down 8.78% year on year.

The Guardian continues to struggle year on year but saw a slight boost in April. Circulation rose 1.07% month on month to 263,907 but the paper is down 9.27% year on year.

The Sunday Express marked a successful April, with blanket royal wedding coverage and supplements. The title was up 12.84% month on month to 601,666.

Times newspapers considered to suffer in the Sunday market, with the Sunday Times down 1.31% to 1,018,215 – dangerously close to falling below 1 million.

The Sunday popular market stayed relatively flat in the period, but the News of the World saw a circulation decrease.

The News International-owned title, that admitted its journalists had hacked celebrities’ phones at the start of April, was down 2.18% month on month to 2,606,397. The red top is now down 7.84% year on year.

Like its weekly title, The Sunday Mirror also marked a slight resurgence in April. Circulation rose 3.23% to 1,097,434 month on month, but the paper is still down 5.23% for the year.