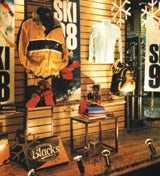 Outdoor clothing group Blacks Leisure has appointed Miles Calcraft Briginshaw Duffy to its advertising account, which is worth more than &£1m.

Robey, who was previously commercial director at Dollond &amp; Aitchison, held talks with a number of agencies before appointing Miles Calcraft in place of incumbent Newcastle agency Robson Brown. It is not known whether there was a formal pitch.

Based in Northampton, Blacks Leisure trades from more than 440 outlets. Millets is its largest chain with more than 250 stores. It also owns hiking store Blacks Outdoor, surfing retailer Just Add Water, and Free Spirit which sells surf, sake and snowboard goods. In addition it holds the UK licence for the US surfing brand O’Neill and sells this in 16 stores.

Last month the group unveiled healthy Christmas sales with a 6.2 per cent increase in like-for-like sales for the eight weeks ending January 15. Total retail sales rose 14.2 per cent for the period.

The group is hoping for an increase in people taking up outdoor pursuits on the back of fears of increasing obesity levels.