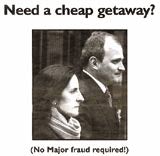 Major Charles Ingram and his wife Diana, who were found guilty of fraud in the television programme Who Wants to be a Millionaire?, have failed to have an ad that used their image censured by the Advertising Standards Authority (ASA).

No-frills airline easyJet ran a press ad that used the strapline “Need a cheap getaway?”, and beneath the photograph it stated “(No Major fraud required!)”. The couple claimed the ad constituted an invasion of their privacy, because their image was used without their permission and was offensive and distressing.

According to the ASA, the advertisement portrayed the complainants in a way that was consistent with the verdicts in their recent court case and not in an unfairly adverse way.

Meanwhile, objections to a poster for Maxim magazine, which showed a man lying on a bed with his flies undone and a pink cuddly toy protruding from his trousers, have also not been upheld by the ASA.

Six complainants said that the ad was offensive because the cuddly toy seemed to represent an erect penis and was also likely to cause distress to abused children.

The poster had been submitted to the Committee of Advertising Practice (CAP) Copy Advice team before publication; and CAP had considered it acceptable.

The ASA is investigating complaints about a leaflet sent by camera manufacturer Minolta, in the guise of a speeding ticket.