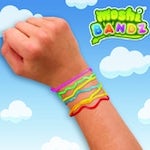 The planned wristbands take the form of popular Moshi Monsters’ characters and come in varying shapes and colours, with some much rarer than others to increase their collectability. The bands will launch in October across major retailers and newsagents, priced £1.49 for a pack of 10.

Mind Candy also plans to roll out a television, print and online advertising in support of the product, as well as mass sampling.

Michael Acton Smith, CEO, at Mind Candy says: “This is a really exciting development for us as we bring the virtual world alive with a range of physical products.”

Mind Candy was founded in 2004 by Michael Acton Smith, a UK-based entrepreneur who previously founded Firebox.com.