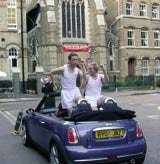 Now the Diary has heard of the Hull Truck theatre. And, in the old days, there were even such things as stagecoaches, which may or may not have housed touring productions of the latest farce, tragedy or Lloyd-Webber extravaganza.

So the latest wheeze from BMW is really rather old hat: to advertise the launch of the Mini convertible, the company is staging performances of the Mini Open Air Theatre in ten cities around the country.

One-minute performances of four pieces (including 2001: A Space Odyssey, which on celluloid lasted for very nearly a week) will be put on outside pubs, using the car as a stage.

If the gods smile upon it, it’s certain to be a huge success – unless the car stalls.