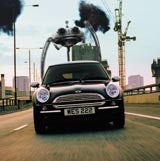 BMW’s Mini is to continue its association with ITV1 drama by sponsoring a new series called Between the Sheets, in place of Cold Feet which ended earlier this year.

The six-part series is about the lives of two families seen through the eyes of a sex therapist, a member of one of the families, and is due to be screened in the autumn.

Mini is expected to evolve its “mini adventure” theme by creating a series of idents under the banner “A mini guide to romance in association with Between the Sheets”.

The £600,000 sponsorship has been negotiated between Granada Enterprises and Aegis-owned Vizeum on behalf of Mini.

Mellor has been quoted as saying: “It’s a no-holds-barred, frank exploration about heterosexuality in the 21st century.”

The drama has been made by Rollem Productions and is executive produced by former ITV director of programmes, David Liddiment.