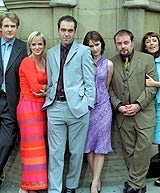 BMW’s Mini has fought off stiff competition in a bidding process to secure the sponsorship of ITV’s comedy drama Cold Feet, which returns for a forth series in November.

The website, Coldfeetonline.com, will have a link to the Mini website and will be signposted in the credits.

Sponsorship of the last series by United Airlines was worth &£1.5m, but included sponsorship of spinoffs, including the Cold Feet book, video and DVD.

In July, United Airlines renegotiated its &£1m sponsorship of the series, but had to pull out following the terrorist attacks in the US on September 11.

The deal was negotiated between Granada Enterprises Commercial Ventures and Carat Sponsorship. WCRS will be responsible for creating the sponsorship credits.

Granda Enterprises senior sponsorship executive Stewart Hunt says: “Cold Feet has consistently proved its worth to the ITV schedule by delivering a lucrative and upmarket audience.”

The show returns on November 18 and will run on Sundays and Mondays for four weeks. The last series achieved an average audience of nine million and won its time slot for every episode.