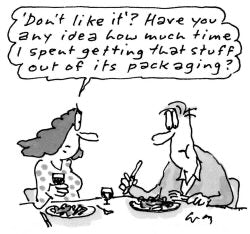 Not content with eradicating chewing gum abuse, Defra minister Ben Bradshaw wants us all to wage war in chicken tikka for one.

Not for him the waking hour frittered in lax amusement or idle repose. Let others through idle fingers see the speeding seconds slip – our man has better things to do. While idlers make chains from paperclips and fashion paper gliders from urgent memos, he is at his desk, sleeves rolled, pen poised, brain sparking on all five cylinders. From his stern brow, chewing gum initiatives fly like thunderbolts and from his curled lip, crackdowns on waste rattle forth like gunfire.

Last week it was the turn of the supermarkets and food manufacturers to quail beneath his frown. Despite being warned, he said, certain miscreants were still wrapping their goods in too much packaging. Should they persist in this planet-wrecking course, he warned, he would consider legislation.

In the meantime, he had some advice for you and me, the consumers. If, as we perambulate the aisles and peruse the shelves, our eye should fall upon a ready-made faggot, pease pudding and mash meal that looks too wrapped up for its own good, we must not let “I dare not” wait upon “I would”. There are, said the minister, two courses of action open to us. Either we report the offence to our local trading standards officer, who will no doubt prosecute the matter with all the redoubtable fervour at his or her command, or we should leave over-packaged goods at the checkout “for supermarkets to deal with”. That’ll show ’em.

Since we were not present at the meeting between the minister for paper bags and the supermarket emissaries, we cannot say what happened next. I would imagine that, their audience concluded, the latter respectfully withdrew, walking backwards and bowing deeply. We do know, however, that before they left they fingered the true culprits.

While conceding that between 1999 and 2005, the volume of packaging waste produced across the UK grew by 12%, they blamed it on the use of ready meals by one-person households.

These lonely sole occupants, or masturbators, as the late Auberon Waugh described them, are too feeble and afflicted by lassitude to peel potatoes and the like but, thank heaven, can still summon the fortitude to get to Sainsbury’s and buy chicken tikka masala for one. Now that small pleasure is to be denied them.

For, if they are to follow the minister’s advice – and the alternative is to let the planet go hang – they must leave their suppers at the checkout, unpaid for and uneaten.

It takes a particularly hard hearted, not to say ruthless, man to stand between the auto-eroticist and his Asda bubble and squeak. Moreover, it is unnecessary when other simpler and less hurtful measures lie to hand.

One would have thought this Government might have fallen back on tried and tested techniques. For instance, it could advertise in The Guardian for a Singletons Tsar, whose task would be to oversee a national co-ordinated campaign to persuade single occupancy householders to take in lodgers. Local authorities would quickly take the hint and recruit Live-in Partner Persons Outreach Awareness Officers, salary circa £25,000 plus index-linked pension and travel allowance. They would preside over a nationwide policy of encouraging people to move in with each other and eat Chinese takeaways.

The problem of excessive packaging would be tackled at its root. As it is, the minister for paper bags is treating the symptom, not the ailment. And, to be frank, he’s not doing that very well.

Admittedly, there will be zealous shoppers who will be eager to scour the shelves in search of over-wrapping, which they can report to their local trading standards officer. There will be others with the time and inclination to fill their trolleys with items that, in their inexpert opinion, are packaged to excess and which they can dump with a triumphant smirk at the checkout. The store can then put the items back on the shelves, ready for the next self-appointed environmentalist to experience the thrill of self-righteousness.

I know that you, dear reader, are not like that, but you still have a part to play. Should you by chance spot a minister for chewing gum or his alter ego, the paper bag panjandrum, pick him up and pop him in the nearest bin. Eliminate waste. Keep Britain Tidy. •