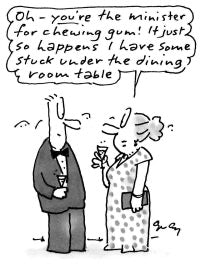 If, like me, you have taken a look at HM Government and, noting that it includes a Secretary of State for Culture, Media and Sport and a Deputy Prime Minister in charge of This, That and, if you will excuse the expression, the Other, you may have thought, like me, that all that was lacking was a Minister for Ships and Shoes and Sealing Wax. Well, I have good news. It includes the next best thing – a minister for chewing gum.

He is Mr Ben Bradshaw, and though his official title is junior minister at the Department for the Environment, Food and Rural Affairs, it is in matters relating to chewing gum that he excels.

Present him with a gum-related challenge and he will spit on his hands, roll up his sleeves and give of his best.

Although he does not qualify for a ministerial red box, he must have some other receptacle in which to include his papers – a plastic bag, perhaps – and you may be assured that it bulges daily with items concerning masticatory petroleum-based polymers. On a typical day, these might include chewing gum reports, chewing gum initiatives, chewing gum meetings, chewing gum outreach programmes and, of course, chewing gum crackdowns.

For it is a regrettable fact that although chewing gum comprises a significant item in the British consumption of goods and services – sales were £405m in 2005 and are expected to rise by 3.2% this year – it is in the eyes of many a filthy and disgusting habit and the cause of unsightly pollution on our streets, the soles of our shoes and the seats of our pants.

Mr Bradshaw must therefore use all the considerable diplomatic skills at his command both to commend an industry whose enterprise contributes to the nation’s coffers and to combat the unpleasant consequences of its output. Last week’s news that Cadbury, the world’s biggest confectionery group and therefore a jewel in the crown of British industry, is to enter the chewing gum market here – in its home nation – will have tested Mr Bradshaw’s mettle. On the one hand, it is a cause of national pride that Britons are the second biggest consumers of gum in the world and that Cadbury is to take on the giant Wrigley – and, with luck, dent its pre-eminence – but on the other there is the vexed matter of the environmental degradation caused by gum. Local authorities claim it costs 3p to produce a piece of gum and 10p to clean it off the streets. Last year, councils spent £8.5m cleaning up gum.

Its defenders claim that it has beneficial properties. It aids concentration and is good for the teeth. They overlook another benefit, which is that it helps the casual observer to form judgements concerning his fellow man. I don’t know if you have ever taken a stroll through the country and paused to observe a sheep over a five-bar gate. If so, you will have noticed that the animal will, more often than not, look over its shoulder at you with an unmistakable glint of cold menace in its eye, a sight made still more disturbing by the slow and deliberate sideways movement of its lower jaw as it continues to chew on a mouthful of grass. The chewing gum user achieves the same effect on the onlooker, enabling him or her to form a sound assessment as to the social class, intellect, manners and overall appeal of the chewer.

In attempting to stamp out the litter caused by carelessly discarded gum, Mr Bradshaw has explored a number of possibilities. These include the formation of a Chewing Gum Action Group, whose initiatives to date number: on-the-spot-fines for the dropping of gum; ads on high streets, bus shelters and phone boxes; tram cards and beer mats in bars and pubs; “local media events” involving schools and universities; and the trial of “free innovative disposal solutions, such as gum pouches”.

Answering a parliamentary question last week, Mr Bradshaw declared that in a number of pilot areas, these schemes had achieved a 37% reduction in chewing gum litter.

A good achievement, perhaps, but not good enough. If he is serious about stamping out the social menace of chewing gum, he should draw on past experience and apply the “smoking solution”.

Tobacco remains a legal product in name but has effectively been outlawed through the diligent application of science. The same could be done for chewing gum. It’s time for the scientists to meet the challenge head on. It should be easy. For the people who pronounced that climate change will produce famine, disease, drought and flooding on a biblical scale, it should be a doddle to prove that chewing gum slays thousands.