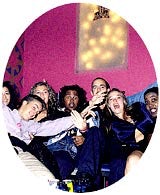 Ashley Peniston-Bird, who spearheaded the transformation of Ministry of Sound from an underground nightclub into a global brand, is leaving to pursue other interests.

Peniston-Bird joined the London club six years ago as a brand consultant before becoming brand development director in 1997.

He helped turn Ministry of Sound into a leading youth brand with the launch of a music label, clothing business, holiday company, dance music magazine and a host of branded merchandise including Ministry of Sound hi-fi equipment.

He recently oversaw Ministry’s first venture into interactive entertainment when it signed a deal with video games developer Moderngroove.

The deal will see the Ministry brand, along with exclusive music sets mixed by the club’s DJs, used on a forthcoming PlayStation 2 title.

His departure comes as a spokeswoman for Ministry of Sound denies it is in discussions to license the nightclub brand to Luminar, Britain’s biggest nightclub operator, which owns the Hippodrome in London’s Leicester Square and the Chicago Rock Café chain.

Ministry of Sound would not comment on Peniston-Bird’s departure or whether he is to be replaced.

Bulmer has appointed Andrew Carter to the newly-created role of marketing controller for the company’s beer division. Carter, who was previously marketing director for Bulmer in Australia, will be responsible for developing the company’s beer business, which already includes a number of premium international brands such as San Miguel, Red Stripe, Amstel and DAB. Carter […]

Cereal giant Kellogg has joined forces with yogurt brand Müller to launch a new dairy product in the Corners range.