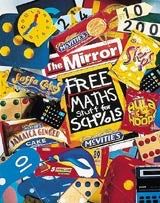 The Mirror has teamed up with United Biscuits to launch a £15m scheme to provide free maths equipment for schools.

Under the collection scheme, called Maths Stuff For Schools, more than 5 billion tokens are to appear from October on packets of McVitie’s biscuits, packs of KP snacks and in Trinity Mirror titles The Mirror, Sunday Mirror, Sunday People, Daily Record and Sunday Mail.

The idea is that families collect the tokens and hand them to their children’s schools. The tokens can be exchanged for more than 100 maths learning aids chosen from a specially produced catalogue being mailed along with details of the scheme to the 38,000 registered schools in the UK.

The parties claim that it is the biggest promotion of its type and larger than the News International and Walkers Free Books for Schools scheme, which at launch was to make more than 1 billion tokens available.

A joint £1.5m TV advertising campaign will break in January to support the scheme.

The move comes as the Government launches its numeracy strategy for schools. McVitie’s and Trinity Mirror both responded to a government appeal in March for businesses to get involved in the numeracy drive, and will also sponsor a competition to find a name for the Pythagoras-style logo chosen for the Maths Year 2000 campaign.

Education and Employment Secretary David Blunkett says of the collaboration: “This is an example of how business can support schools, teachers and parents.”

United Biscuits is looking for £42m additional sales across the three McVitie’s and KP categories of biscuits, snacks and cakes.