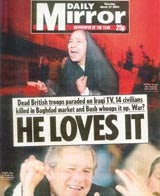 It has been almost a year since the Daily Mirror repositioned itself as a conduit of “serious news” in an effort to distance itself from red-top competitors. But observers wonder just how long it can maintain the strategy as the tabloid’s circulation looks set to drop below the psychologically important 2 million mark, when the latest circulation figures are released this week.

The Daily Mirror has experienced a tumultuous 12 months during which it launched a vicious, but ultimately futile, price war with rival The Sun, abandoned plans for a joint advertising sales house with The Telegraph Group and in February saw the arrival of new Trinity Mirror chief executive Sly Bailey from IPC Media. Her first major task is to decide whether or not to sell off the national titles.

Industry commentators say the newspaper misjudged the mood of the nation by taking an anti-war stance on the Iraq conflict. Its circulation fell below 2 million during the first two weeks of war, down from an Audit Bureau of Circulations (ABC) figure of 2,042,092 for February.

Numis Securities media analyst Paul Richards says: “I think the anti-war stance is a bit strong, bearing in mind there would be a lot of Mirror readers not opposed to the war and with family members out there.”

However, the Daily Mirror may also be a victim of general war fatigue, points out one expert. All newspapers saw a surge in circulation during the first few days of war, with the Daily Mirror reporting 40,000 extra sales on the first day against the extra 54,000 reported by The Sun. But observers have suggested that sales across the board soon declined to normal levels, or even lower, as war coverage has become a turn-off rather than a turn-on.

Editor Piers Morgan has pre-empted publication of the official ABC figures by claiming that the Daily Mirror’s decision to strip out bulk sales last year was always going to leave circulation “tight”. He also made it clear that the newspaper would not look to quick fixes – “with huge bulks and give-aways” – to massage the figures. When bulks were stripped out in April 2002 they accounted for 1.3 per cent of monthly circulation or 27,000 copies a day.

The money saved from bulks was used to help relaunch the newspaper in April last year, with a &£17.8m investment in editorial and marketing, and a branding campaign featuring the strapline “The Mirror Think Again”. 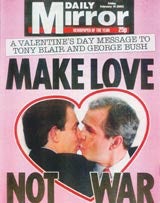 However, circulation has continued to slide, albeit with the occasional monthly spike provided by scoops such as the Paul Burrell revelations. Average net circulation for the six months ending February 2003 was 2,088,469, down 3.53 per cent on the same period last year.

Nevertheless, analysts and industry insiders believe the Mirror’s move to a more serious news agenda is worth pursuing, as it has to differentiate itself from The Sun. But they say that the tone has shifted too far and the newspaper should not forget that it caters for a popular market. One senior executive at a rival tabloid says: “The biggest mistake they have made is that, despite all their efforts, they have not got in touch with their readers. Readers do not want a dull or worthy product.”

Mirror Group Newspapers (MGN) marketing director Alisdair Luxmoore defends the newspaper’s stance by saying the “serious” tag refers not just to news but to “serious sport and serious celebrity coverage”. It was noticeable when the newspaper began lightening its front page last week, with trails on the marriage bust up between Emma Noble and James Major.

Industry figures also claim that the newspaper made a mistake by launching a now halted price war, pointing out that the group was never going to match Rupert Murdoch’s deep pockets. An MGN spokesman says: “It has always been our intention to raise the price in 2003. As we’ve said consistently, you can’t make a full judgement on our performance until we have price parity with our rivals.”

The Mirror’s positioning puts it up against mid-market tabloids The Daily Express and the Daily Mail. But Paul Thomas, press director at MindShare, points out that the timing is poor as Express Newspapers, under Richard Desmond’s ownership, is no longer a “soft target” and that Associated Newspapers has been forced to up its game.

Thomas doubts that the new-look Mirror has yet to deliver “an audience significantly different than before” as far as advertisers are concerned. Nevertheless, the newspaper took the largest share of display advertising volume among newspapers in the mid and popular sectors in 2002 – 19.8 per cent compared to The Sun’s 19 per cent (Nielsen Media Research). In terms of volume the Daily Mirror also outperformed the market, which was down 1.2 per cent in 2002 while it fell only 0.3 per cent.

Roland Agambar, group marketing director for Express Newspapers, says that the serious stance taken by the newspaper, especially on its front cover, does not sit well with shouting about promotions – a vital marketing tool for newspapers such as the Daily Mail and the Daily Express.

Luxmoore admits the Daily Mirror has spent less on promotions than competitors, but says it still appreciates their importance, having run a flights offer with bmi in February.

Like all national newspapers the Daily Mirror is fighting a losing battle to retain time-pressured readers who are resorting to other forms of media for their news fix. This is one factor that Bailey will have considered by the time she unveils her vision for the future of the newspaper at the next set of interim results in July.