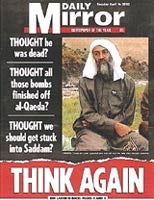 The Sunday Mirror is to get a glossy celebrity supplement, M Celebs. The move forms part of Mirror Group Newspapers’ (MGN’s) relaunch strategy for its national and Sunday papers.

“M” is the brand MGN has developed to target young women. The Mirror is to introduce an M Health supplement tomorrow (Thursday).

The magazines will sit alongside the established M titles, which come out on Thursdays and Saturdays.

Other changes include the introduction of an entertainment supplement – The Ticket – on Fridays and a new Review section on Saturdays.

A racing pull-out section, called The Winner, is also part of the Saturday package.

M Celebs will be a 72-page supplement focusing on celebrity stories and gossip. It replaces the Sunday Mirror’s Personal magazine. TV listings will be transferred to the magazine.

Express Newspapers, which is carrying out a price-cutting offensive in the Carlton region, introduced a second glossy magazine – S:2 – to the Sunday Express last week.

The Mirror returned to its original name, the Daily Mirror, this week and has changed its masthead, dropping the “tabloid red” background.

The company has launched a multi-million pound ITV marketing campaign, by M&C Saatchi, in support of the changes with the strapline “The Mirror… Think Again”.