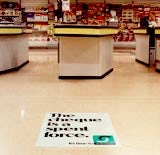 A visit to any big supermarket outlet will tell you that shoppers are constantly inundated with advertising messages.

Point of purchase (PoP) material clamours for attention, highlighting special offers along every aisle, while sales messages lie in wait around corners, hanging from the ceiling. Is there any need, or indeed room, for floor advertising as well?

Alexandra Goldsmith, client services director at brand communications agency Myrtle, suggests that floor media presents an interesting conundrum for advertisers. She says: “In a world where all the walls are covered in advertising, people already find it hard to duck out of the way. They are bombarded at every turn of the trolley with ‘bogofs’ and extra loyalty points.

“However, it is well known that many people make their shopping decisions at the point of purchase (particularly in supermarkets), and when there are thousands of other brands sitting next to yours on the shelf, it is difficult to stand out.”

Clearly floor advertising offers a chance for brands to get themselves seen, but Goldsmith believes consumers are becoming a lot more effective at blocking out sales messages, and therefore she questions any form of communication that tries to creep “under their radar”.

She adds: “Floor media may well have a novelty attached to it that will make it entertaining for a while. But entertaining without substance isn’t going to do your brand any good in the long term, and I think brand owners have to be very careful about not creating more clutter. There’s an awful lot of noise out there already.”

Opportunities for floor advertising are also severely restricted by the limits that retailers tend to place upon brands. More often than not, the breadth of opportunity to exploit a product within a store is part of the package that is agreed between the manufacturer and the retailer, says Olly Raeburn, managing partner at marketing agency Liquid Communications.

This can be quite a limiting factor in the sense that most major retail chains don’t need to sell floor advertising to survive. Therefore, they are often not keen to provide brands with the space.

Charles Endacott, managing and creative director at marketing services company Endacott RJB Marketing, explains that supermarket chains can often change their policy towards floor advertising at a moment’s notice, so agencies are unsure whether restrictions will suddenly be imposed. And while one store group may be willing to offer space, another may not.

“They seem to change their mind about it constantly,” says Endacott. “And that means one of the main problems we have is we can’t really incorporate floor advertising into integrated campaigns. As a result, it probably isn’t taken as seriously as it should be.”

Part of the retailers’ reluctance is, perhaps, due to their eagerness to protect their own brands. The big supermarket chains, in particular, have become major brands in their own right and some would probably rather utilise space promoting their own offerings.

Mark Ransom, sales director at Antone, which designs, manufactures and installs retail interiors, suggests there is little demand for floor graphics, apart from perhaps in convenience stores, where the impulse buying factor tends to be fairly high.

He says: “As long as the image presented on the floor is recognisable, ideally reflecting the above-the-line image, it can work. But I think it’s only of benefit for a recognisable brand name like Coca-Cola, whereas with a new product it may not be as effective, and it may even confuse. So it’s something that probably needs to be ancillary to other advertising activity.”

Ransom suggests that the grocery, publishing and department store sectors have been tidying up their in-store displays recently and favouring a “generic look”. And this approach is not conducive to floor graphics.

“The trend seems to work in a five-to seven-year cycle, where stores go from a lot of free-standing and branded items, then back to the generic look, and then back again. It becomes a fashion thing,” he explains. “If a retailer is trying to tidy up its environment and make it a cleaner and easier place to shop, it’s probably not going to want to confuse matters by introducing something like floor graphics.

“In publishing, there’s a definite trend towards that approach. Waterstone’s and Dillon’s have tried to clean up areas and go for something that looks cohesive,” he says.

A lot of agencies, however, maintain that floor graphics do have a role to play in today’s retail environment, and can work particularly well close to a display, in line with store traffic flow and leading up to the target.

Goldsmith at Myrtle points out that studies of people’s eye movements as they shop have revealed that, at point of purchase, people tend to look at the market leader first, and then at the products immediately around it. So a nearby floor graphic clearly has potential.

Raeburn says: “It needs to be a short, sharp hit. If it’s text heavy or over-done, with three or four signs down the same aisle, then obviously it will lose its impact. It needs to be suitable for the message you want to deliver.”

The suggestion remains that many UK brands are failing to recognise the potential of floor graphics. Often, this may be simply because people are unwilling to try something new, and floor advertising falls into this category.

Mark Pollard, sales director at ambient media specialist Traffic Media, says: “I think some brands are reluctant to try floor graphics because it would take money away from other advertising activities. They still see floor graphics as unknown territory.”

According to Pollard there is also a tendency for campaigns to be poorly thought out. Modern printing technology means that floor graphics can be produced using very impressive and eye-catching images, but this opportunity is often missed.

“What people typically do with floor graphics is to take a magazine ad and try and put it on the floor, and that just doesn’t work. You need a specially designed ad,” he says. “It should be treated as an important way of reaching the consumer rather than as a little add-on.”

While the consensus is that, to work to its potential, floor advertising needs to be used in conjunction with other promotional material in-store, the restrictions imposed by the big supermarkets limit its use.

Floor advertising clearly has scope in the promotion of packaged goods, with Safeway being one of the heaviest users of floor graphics in the retail food sector. The big DIY superstores also have the potential to utilise floor ads, as does any store with a large amount of retail space and a wide variety of brands. It follows that the bigger a store is, the harder it is for customers to find products, so floor material that combines advertising with helping to signpost products, also has its uses.

Floor advertising is certainly not a new or revolutionary idea. Nor is it one of the more prestigious advertising media available to marketers. Yet those who influence PoP displays, typically the retailers, are aware of the opportunities of selling floor media and advertisers and agencies will continue to use it as and when appropriate.

There remains an argument which says floor graphics may not be as high-impact as PoP material because shoppers tend to browse sideways rather than downwards. “Getting shoppers to look down and notice floor advertising is not easy,” says Endacott. “It can help support other advertising in the store, but trying to generate a campaign message from a floor ad is difficult.”

When considering floor advertising brand owners probably need to start by focusing on people rather than on product, so the brand actually has a chance of connecting with them rather than being seen as intrusive. Perhaps the biggest danger is that retail environments are now so flooded with advertising that floor graphics could end up becoming nothing more than floorpaper.