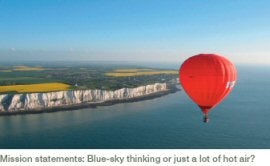 Business gurus love them, but a mission statement that’s badly thought out can come back to haunt you, says Chris Ingram

I have been studying the strange world of mission statements. You may think I should get out more, but I embarked on this analysis because it seemed like a classic area for marketing folk to “own”. Now I’m not so sure.

Business guru Gary Hamel said recently that managers are “not very romantic. They’re not encouraged to dream.” When one looks at the issues facing senior management today this is hardly surprising: life is increasingly short-termist, price competition is intense and it takes just one scare to wobble a company fundamentally. It’s not surprising that there is a need for a big, uniting theme for companies.

In Selling The Dream, Guy Kawasaki says “a mission [statement] acts as a lantern, an anchor and, at times, a conscience” and that it should be “short, flexible and distinctive”. We can buy into that, but how often does it work in practice? Published in 1993, Timothy Foster’s book 101 Great Mission Statements is almost a collector’s piece; many of the companies listed have disappeared or stumbled. The Ford Motor Company’s is instructive: “Our mission is to improve continually our products and services to meet our customers’ needs, allowing us to prosper as a business and to provide a reasonable return for stockholders, the owners of our business.”

Sounds reasonable, but 13 years on, Ford has failed to meet these targets and looks more like a ship holed on the waterline. This is a case of “mission statement as publicly-stated objective” that has failed.

It’s a mistake I made some years ago when I said CIA’s objective was to be one of the world’s top six media agencies. A hostile competitor took great joy in telling the City I would fail. We became seventh from a standing start, but, unwittingly, I’d made it seem a relative failure.

Far worse is the mission statement based on values which aren’t delivered. In the 1990s, a huge US bank took over CIA’s corporate brokers. The day after I’d heard the news, I was standing in the broker’s reception and there, screwed to the wall, was the new owner’s statement extolling the importance of its staff. Unfortunately, I’d heard the previous day that the bank had fired half the management by phone from New York without ever having met them.

There are indecipherable mission statements: “The trustees will be striving to achieve the charity’s mission in an affordable envelope.” Oh dear. They must have been got at by the PR company or some bright new hiring in marketing.

Then there is the mission statement for shareholders. Centrica’s website says “Our distinctive strategy is to create value for shareholders. This is at the heart of everything we do.” Can’t you just see their employees, galvanised by this vision, leaping out of bed on a rainy Monday morning and rushing to work? But the biggest offence is the “wishion statement”. It’s what the top management would like the company to be, but is not remotely based in reality. A good example was issued by the EU in Lisbon in 2000: “To become the globe’s most competitive economy by 2010.” Clearly they didn’t want to be confused by the facts.

Finally, if you’re not careful, there’s mission statement as paperweight. To quote that great office survivor, Dilbert: “I left mine in the sun and it set fire to my cubicle.”

This is not (just) an opinionated rant. There is now a reaction against mission statements. European research by Extensity shows that only 56% of business leaders believe all their employees are aware of their mission statement, 41% don’t monitor whether they’re being fulfilled, and 20% of businesses have ditched them.

So if you’re going to have a mission statement, here’s a checklist to help you avoid the pitfalls: What is the overriding business imperative and how does it help to get us there? Is it based on reality? Is it credible with employees, customers and shareholders? Is it based on the “controlling idea” for the business? What is the culture? What are the values, attributes and competencies at the core of the business that are positive and differentiating, on which the mission statement can be built? Benchmark it! Getting there is very hard work and it needs constant application, not just a set of cards or plaques. You need regular research. measured among all stakeholders, to see how you’re delivering. If you can’t live by it, change it or bin it.

Remember, the world is not waiting for your mission statement. To have one that you’re patently not delivering is to risk becoming a laughing stock. Better to say nothing than to say something stupid.

Of course, it could be the simple, unvarnished truth. But Mitchell & Butlers’ insistence that its subsidiary All Bar One is delisting Magners cider in favour of a small, Suffolk-based brand called Aspall because Magners isn’t upmarket enough rings hollow all the same.

Company: Loyalty Management UK (the company which owns and operates the Nectar loyalty programme in the UK) Job title: E-Commerce Director What made you want to get into marketing?: First, the variety of disciplines encompassed by e-commerce/mar…