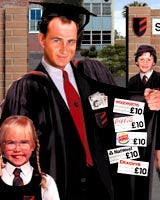 The launch of Schools Plus, a scheme which aims to pour millions of pounds into the rapidly emptying coffers of schools across the UK (MW last week), has brought the subject of marketing to pupils back into the spotlight and once more questions the ethics of marketing to children.

Since Tesco launched its Computers for Schools scheme in 1990, Walkers Crisps tied up with News International to market its Free Books for Schools on-pack promotion in 1998 and The Mirror and United Biscuits launched a free maths equipment deal two years ago, major education marketing exercises have been thin on the ground.

Now Schools Plus aims to become the mother of all corporate funding schemes in primary and secondary schools across the country. The company is on the verge of signing up global giants such as Coca-Cola and Burger King to an initiative which, it claims, could raise millions of pounds for impoverished schools.

Brands which join the scheme will be included in a book containing vouchers worth up to £250, which can be refunded against participating sponsors’ products. The books will be sold to parents for £10, of which £7 will go into school funds, with the remaining £3 going to Schools Plus to cover costs. This raises the question of whether the parents are being encouraged to pay for their children’s education themselves, in exchange for discounts on brands. There is also the added worry for parents that if they don’t buy the vouchers their children will not receive a proper education.

The company says the initiative differs from other school incentive schemes, such as Walkers’ and Tesco’s offers, because it allows more than one brand to participate “in an unobtrusive way” and includes brands children buy as a matter of course.

Schools Plus was set up at the beginning of last year by a group of senior marketing figures who have all been involved in education, either as school governors or through the running and creation of school promotions.

Two teaching unions, the National Association of Head Teachers and the Secondary Headteachers’ Association, are backing the scheme and must be rubbing their hands with glee at the prospect of securing funding from these global giants.

But despite Schools Plus’s ostensibly altruistic approach, opponents of the scheme are worried that brands are fostering relationships which will give them more control over children – their own future consumers.

Rumours in educational circles that McDonald’s is planning to install outlets in school canteens in the UK, similar to those it already operates in colleges in countries such as Australia, have so far proved unfounded.

But Naomi Klein’s polemical anti-corporate book No Logo outlines two startling examples of corporate classroom interference. One US school, sponsored by Coca-Cola, held a “Coca-Cola day” and suspended a rebellious pupil for wearing a Pepsi T-shirt.

Klein also highlights another school, which was sponsored by US TV station Channel One on the understanding that pupils watch ten minutes of the broadcaster’s programming every day in the classroom, including three minutes of ads.

Some observers find this approach outrageous and are intent on having all types of marketing and advertising to children outlawed.

The UK’s National Consumer Council (NCC) drew up a list of guidelines in 1989 and relaunched in 1996, which it hoped brands would adhere to when approaching schools with sponsorship or branding possibilities.

The NCC guidelines covered branded information packs and other educational resources, but did not deal specifically with marketing.

But the organisation has been criticised for failing to widely publicise the code or produce any follow-up research on marketing to schools. Many parents still believe regulations exist to prevent advertising from invading classrooms.

The NCC has now passed on responsibility for the regulations to the Consumers’ Association (CA), which is set to release a code of practice this summer, in conjunction with the Incorporated Society of British Advertisers (ISBA) and the Department for Education and Employment (DfEE). The previous code did not have DfEE backing and the new guidelines have no legal status as yet, and are not expected to gain it.

The new code embraces emergent forms of marketing, including voucher schemes like Schools Plus. A steering group, including CA, DfEE and ISBA members, along with representatives of major multinationals, has already presented a draft document, called Commercial Activities in Schools Best Practice Guidelines, to schools minister Estelle Morris.

But the CA is taking a controversial stance on the issue. A spokesman says: “The CA has no objection in principle to advertising to children. They [the children] need to become informed consumers and if the CA opposed that it would undermine the empowerment process.

“A good proportion of commercial activity is of high quality, can add value to the curriculum and can provide additional resources that would otherwise be unavailable.”

The CA says it has been “mindful” of other guidelines, such as the Food Standards Agency’s code of practice on nutrition, which was set up to monitor the marketing of food to children. However, the CA’s admission that children are “a particularly vulnerable group of consumers” has prompted the latest regulatory framework. Harry Brighouse, professor of the philosophy of education at the University of London and a vehement opponent of marketing to schoolchildren, says: “Children watch enough television and are surrounded by billboards. They are continually exposed to attempts to sell things to them and to encourage brand loyalty among them.

“School should be a place where they learn to make rational and critical judgements about ads and other messages, whether political or religious.”

Brighouse argues that although schools are under-funded, the benefits of exposing children to brands are “dubious”.

“I don’t blame headteachers for taking advantage,” he adds. “But it shouldn’t be their job to sell things to parents.

“Schools are in danger of becoming just another environment for corporations to get to children. I resent the idea that my daughter may in future be told what to watch on TV, instead of devoting time to learning. I honestly think that will happen.”

Simon Anholt, planning director at creative agency Cave Anholt Jonason, claims that schools are selling out because they are so strapped for cash and that they will undersell the true value of their pupils to marketers.

With burgeoning cynicism among consumers forcing advertisers to seek increasingly innovative ways to reach audiences, Anholt believes schools should seek a better deal from brands which want to tap into pupils’ minds and pockets.

He agrees with Brighouse that the scenarios Klein describes in No Logo are likely to be repeated in the UK, as brands intrude further into the classroom.

He says it would be prudent for the Government to set up a panel of experts to deal with ethical issues arising from proposed school sponsorship or marketing schemes.

Anholt adds: “Schools believe the marketers are doing them a favour, so the businessmen get what they ask for.

“Teachers should be telling brands that they know companies want to buy into the classroom because consumers no longer believe messages through traditional media. Schools are an incredibly precious medium and should only talk to companies if the brand owners realise the children are schools’ first priority.”

Observers feel a major bone of contention is that young children will swallow messages from the likes of Coca-Cola and Burger King because they haven’t sufficient education to “inoculate” themselves against the ads.

In 1998, the Government launched Education Action Zones – partnerships between Local Education Authorities and businesses, designed to tackle educational under-performance in certain areas of the UK.

Although EAZs have raised £37m in three years, a recent Green Paper on schools barely mentions them. Observers believe this indicates that the Government and businesses do not think the concept has been a great success and that brands are seeking different ways into schools.

The problem teachers face is that many of the brands targeting children are those which they want to keep out of schools, such as unhealthy fast food and soft drinks brands.

But one headteacher interested in Schools Plus insists it will be of benefit without harming children’s way of thinking.

Tim Andrew, headteacher of Chesham High School, Buckinghamshire and a member of the Secondary Headteachers’ Association says: “We try to teach pupils how to be critical through the curriculum. We wouldn’t want to tell them what to buy.

“Because it’s a voluntary scheme, there should be no stigma attached to children whose parents can’t afford the vouchers.

“Schools generally have misgivings about commercial opportunities with any company. But if we work hard to promote the scheme and sell more vouchers, we will benefit more.”

She says: “It’s fine if companies show they’re providing something to schools, because then they get something out of a tie-up. But vouchers don’t really explain a brand’s equity or build lasting relationships.

“In an ideal world, schools would be able to afford the latest equipment and marketing would have no place in the classroom. But if this type of activity was banned, brands would just find another way in.”

Many people feel teachers and parents hold the moral high ground on the thorny issue of marketing to pupils. But unless schools can use that to leverage a better deal from businesses on behalf of their pupils, brands will continue to knock on school gates that are already open, and to use teachers as their pliable salesmen.