Some members of the Health Committee last week raised the possibility of blanket bans on alcohol advertising in the UK, with Labour MP and Committee member, Stephen Hesford, predicting that “we’ll be back here in five years’ time and there will be statutory regulation”.

Other members are not so sure a blanket ban would work. Robert Syms, Conservative MP for Poole, says that advertising has an important role to play in providing information. “Banning it would reduce the flow of this information and could lead to worse, rather than better, choices.”

Meanwhile, today the Conservative Party has called for an overhaul of alcohol labelling, which would scrap the term “units of alcohol” in favour or measures of pure alcohol.

The party says adopting the European system of specific measures would ease the confusion caused by the units.

The Health Committee’s cross-party study called for the regulation of alcohol promotion to be “completely independent of the alcohol and advertising industries”, bringing the role of the Advertising Standards Authority and The Portman Group under scrutiny.

But the study ‘Public health, advertising and reality’, published in World Economics, directly attacks the British Medical Association’s study and argues that the BMA had simply “picked on” advertising as a key driver of alcohol consumption.

The author of the new study, Tim Ambler, honorary senior research fellow at the London Business School, points to evidence from France, where numbers of heavy-drinking teenagers increased by 30% between 1999 and 2007 in spite of a new law, ‘Loi Evin’, which limits alcohol advertising to information only. By contrast, the UK equivalent increase was 8%. 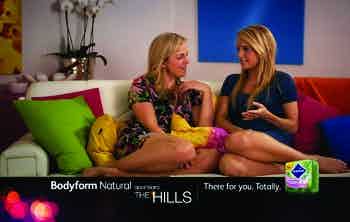 Feminine hygiene brand Bodyform is to sponsor the US television series The Hills on MTV and Viva Channel.

A round up of the retail stories from the week… Blacks, BrightHouse, Peacocks, Tesco, Supermarkets and B&Q

The Office of Fair Trading is considering investigating the proposed merger between Orange and T-Mobile in the UK.